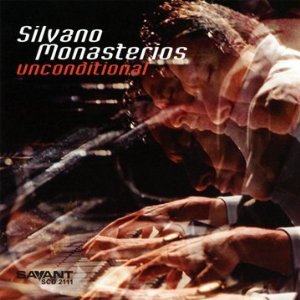 Silvano Monasterios reaped the benefit of a valuable education. Born in Caracas, Monasterios studied classical piano at José Lamas Conservatory, learned the traditional rhythms associated with sambas of South America, and studied jazz at home with his father.  This combination has integrated and developed Monasterios into a superb composer and performer. After winning a scholarship award for best soloist at the Miami Jazz Festival, he moved to the United States to attend Miami-Dade College. He has several jazz honors both here and in Venezuela, and has recorded with Arturo Sandoval and Paquito D’Rivera. “Unconditional” is his fourth release as leader, and his first recording for the Savant label. Here he utilizes the talents of his Fourth World Ensemble featuring Troy Roberts on saxophones, Jon Dadurka on bass, Rodolfo Zuniga on drums and José Gregorio Hernández on percussion.

The whole CD is one evolving story, a suite as in albums of old. It expresses Monasterios’ personal history and relationships in a variety of moods. With the first few tunes inspired by and dedicated to family and youthful personal influences (including his dog), the second half expands into visual and aural influences richly expressed through Monasterios’ unique composition and piano style. “Farmacia del Angel” is a tribute to his father, Silvano, and features a combination of cultural rhythms in samba and Venezuelan meringue. Laid over these traditional sounds are tasty piano licks which reflect the influences of Chick Corea and Herbie Hancock. “Monsier Petit Noir”, named for Monasterios’ dog, is a playful romp that is executed with internal and external adventure by Roberts. The call and response sections in this composition are indeed reminiscent of an afternoon in the park with a beloved dog! “A Song For Jacques”, presented in two parts, memorializes Jacques Braunstein, a jazz radio show host who influenced Monasterios in his youth. It begins with a grieving, sad bowing of the bass that is a stark contrast to the previous track, but the sadness evolves into grooves and pitches that are joyful and comforting. Part two pulsates and flies with percussive piano work supporting the tenor sax. I wished for a high voice, which never came, but I felt relief when I heard the entrance of a soprano sax on the next tune, “Sno Peas” which also contains beautiful bass work by guest artist Gabriel Vivas. What makes this version so tasty as compared to a previously recorded version by Bill Evans is the inclusion of the Venezuelan rhythm “gaita zuliana” which moves the piece with a new flavor. “Forgotten Gods” is inspired by the visuals of Mayan gods seen by Monasterios in the Mayan Riviera. It is a driving composition which features the walking bass of Dadurka and the drums of Zuniga. The title tune is a change of pace, an original ballad that reveals a romantic theme. The CD closes out with a funky piece, “Black Saint” which mixes electric piano in a low, cool conversation with Roberts’ sax, eloquently supported by the bass and percussion. This tune uses a version of the chimbangle rhythm of the feast of black San Benito from Monasterios’ native Venezuela. At the close of the recording, it feels one has had a peek into the life journey so far of this developing musician.