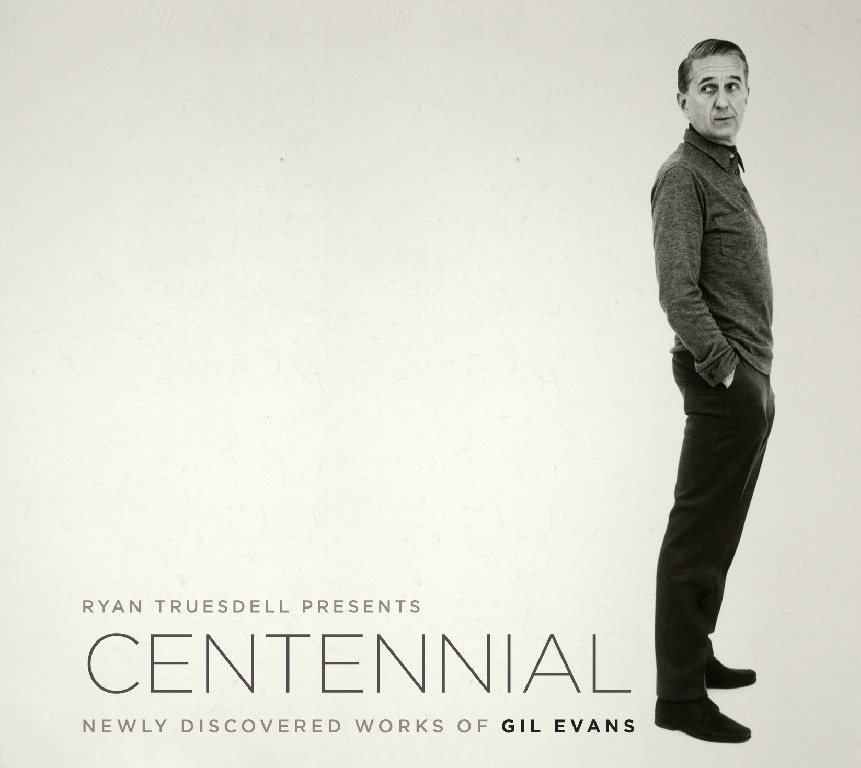 Duke Ellington once called Gil Evans his favorite jazz orchestrator. That’s high praise coming from America’s greatest composer, arranger, and bandleader. On the anniversary of Evans’ 100th birthday, we now have an exciting, historic recording of works from Evans never heard before, that warrants very high praise indeed.  Ryan Truesdell’s new CD Centennial features ten previously unknown pieces arranged by Evans from 1946-1971. Evans’ family gave Truesdell unprecedented access to original manuscripts, and with the assistance of Maria Schneider (who was Evans’ copyist and assistant), the newly discovered arrangements were edited and recorded. In various ways, these arrangements reflect the times of their composition, yet were also progressive in their day. Evans was never content to stand still in terms of style and orchestration possibilities. He continued to evolve through his entire career, culminating with explorations of electronic music and the compositions of Jimi Hendrix.

The recording was made at Avatar Studios in NY and engineered by James Farber. The recording is clean and well balanced, and it enables the listener to enjoy the brilliance and beauty of Evans’ many textures, shadings, and colors. A total of 35 musicians (including three featured vocalists) brought these ten marvelous arrangements to life. The exotic opening piece “Punjab” is a piece that Evans had planned for his 1964 Verve album, “The Individualism of Gil Evans”. When Truesdell studied the score, and heard the rehearsal tapes, he felt that Evans didn’t like the conception of the rhythm section, particularly the drums. For this recording, Truesdell added the tabla of Dan Weiss. Truesdell’s decision was a sound one, and I suspect that Evans would have been very pleased. “Smoking My Sad Cigarette” features Kate McGarry singing the bluesy song made famous by Jo Stafford. (The Evans arrangement was originally written for vocalist Lucy Reed). McGarry’s voice is well suited to this tune and arrangement. At times, she reminded me of Rickie Lee Jones, and it demonstrates again her prowess in interpreting a ballad with depth and feeling. It’s remarkable how Evans’ orchestration makes a small ensemble sound much larger. Evans once extolled the tone of Claude Thornhill’s clarinetist Irving Fazola. Scott Robinson’s velvety clarinet sound evokes the spirit of Fazola through his delicate solo on Evans’ bolero-tinged arrangement of “Who’ll Buy My Violets” (“La Violetera”)

One of the most fascinating pieces on the recording is Evans’ 1950 arrangement of “The Maids of Cadiz”. Evans’ arrangement of the Delibes work for the Miles Davis album “Miles Ahead” is well-known, but the earlier version, created for the Thornhill band, has special qualities of its own. It opens in exciting fashion with a brass fanfare, followed by drummer Lewis Nash evoking an Ellington-like jungle beat on the toms. Alto saxophonist Dave Pietro states the theme and then the band moves into a great swing feel, a tempo change that was omitted from Davis’ ballad version. Another highlight is Evans’ beautiful arrangement of “Look to the Rainbow”. The arrangement was originally written for a 1965 Astrud Gilberto album. It’s brought to life by the extraordinary Brazilian vocalist, Luciana Souza. Guitarist Romero Lubambo, one of Souza’s favorite accompanists, helps to provide just the right feel.

On May 19, 2012, I heard some this music live at the Jazz Standard in New York City. While the CD does not present the music in chronological order, Truesdell covered the music in rough historical order over the band’s 4-day engagement at the club. The band’s repertoire included previously recorded Evans works as well as the newly discovered material.  The May 19 program featured music from Evans’ “Individualism” recording. The eclectic 18 piece band on this night included an all star rhythm section of Frank Kimbrough on piano, Rufus Reid on bass, and Lewis Nash on drums (Reid was a substitute for Jay Anderson, who had played on the recording). The rest of the band included tabla, 3 trumpets, 2 trombones, 2 French horns, tuba, bassoon, tenor violin and 4 woodwinds. Kurt Weill’s “Barbara Song” was one of two selections from the CD reprised at the Standard. It featured the searing work of tenor saxophonist Donny McCaslin (who Truesdell called “our Wayne Shorter” in reference to the original recording). The live version created a different mood from the CD, where vibraphonist Joe Locke was featured. At the Standard, the ending of the tune was totally improvised, with Reid soloing on the coda. Truesdell said that Evans wanted the endings to be fresh and spontaneous, and on this evening, the effect was magical.  It was thrilling to hear “Punjab” in a live setting. It was set up with Weiss’ rhythmic tabla, Reid’s tapping of his bass strings, and Kimbrough’s strumming of the strings inside the piano.  The sounds of bassoon and bass flute enriched the musical atmosphere. Steve Wilson’s alto solo was tasteful and a perfect fit with the vibe of the piece. The acoustics in the club were perfect for this ensemble, and the important dynamics and nuance in the music were well executed and easy to hear.

In the CD notes, Truesdell wrote “I felt I had stumbled upon a hidden treasure that had to be shared with the world”. It is indeed a wondrous treasure, and Truesdell and Evans deserve the highest praise. This is absolutely essential listening.