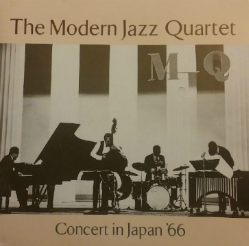 One of the joys of being a jazz fan is discovering recordings where well-known musicians cast off their usual personalities. For instance, there’s the Count Basie/Joe Williams LP “Memories Ad-Lib” where rhythm guitarist Freddie Green surprises us by playing a few short solos and introductions. Then there’s the 1949 Metronome All-Star recordings on which two of the three trumpeters—Fats Navarro and Miles Davis—forgo their easily recognizable styles in order to mimic the other trumpeter in the section, Dizzy Gillespie (Critics and fans still argue about the order of solos in the trumpet chase on the long take of “Overtime”). This week, I found another example. On one night in Tokyo, the Modern Jazz Quartet, known for their impeccable stage manners, let themselves loose and played an inspired concert unlike any of their other recorded performances. The album, released only in Japan, was titled “Concert in Japan ‘66”. No one has ever documented the reason why this performance was so different from their other concerts. However, there are clues about why “Concert in Japan” was not issued in the United States—at least at the time when it was first recorded. Most of the concert consists of pieces previously recorded by the MJQ for Atlantic. Eight of the tracks would be recorded at Carnegie Hall six weeks after the Tokyo concert for the album “Blues at Carnegie Hall”. Finally, the Japanese performance was captured only in mono, when Atlantic and other record companies were phasing out their mono LPs. However, the stunning performances and relaxed atmosphere on “Concert in Japan” make it an important part of the MJQ discography.

The concert took place at Tokyo’s Kosei-Nenkin Hall on March 14, 1966 (TBS Radio, which recorded this concert, would capture John Coltrane’s quartet in the same venue four months later). Pianist and MJQ artistic director John Lewis was probably already thinking about the upcoming Carnegie Hall concert, the first half of which would feature a block of eight diverse compositions, all based on the blues. For the Tokyo concert—and quite possibly, the other ten concerts on the Japanese tour—Lewis programmed three of the blues works back-to-back at the beginning of the concert, one at the top of the second half, and the other four as a block near the end of the program. The blues ran deep in the souls of these four gentlemen, and in the opening selections of the concert, we can hear clues that this concert possessed its own unique vibe. Their introduction on “Really True Blues” is a little louder than the engineers expected, and the levels were brought down very quickly. Percy Heath digs a deep groove with his bass, and Connie Kay responds with a slightly harder attack on his ride cymbal. As Milt Jackson moves from the theme to his vibraharp solo, Lewis provides his usual brand of pithy chords in support. When Lewis takes his own solo, he toys with a blue seventh (an E-Flat) for a few bars before moving forward. A brisk version of “The Cylinder” follows, and Lewis pecks at a D-flat during the opening bars of Jackson’s solo. Jackson digs into his solo, and after Lewis digs in right behind him. Lewis’ solo is filled with strongly accented block chords and he seems ready to push the group beyond its normal style. On “Monterey Mist”, Lewis continues to push the group, engaging Jackson in a fierce dual improvisation. This activity is not lost on Kay, whose drumming grows more aggressive. Near the end of his solo, Lewis realizes that things are getting a little out of hand, so he inserts a Japanese-sounding melody which brings Kay back into the arrangement for the closing theme.

With the first blues segment completed, the MJQ goes into “Midsömmer”, a favorite piece originally recorded in the late 1950s. The Lewis composition, which features strong written lines for vibes, piano and bass, seems to follow its usual route, but the next track, “Summertime” takes a different path. Here Jackson takes the lead. His mind seems to still be on the blues, and with Lewis playing counterpoint underneath, Jackson sounds determined to find the blues hidden deep within the Gershwin ballad. Lewis picks up the idea, and like Jackson, he inserts several blues motives into his solo and leans on the blue notes. However, there’s more than just an overlay of the blues happening on this track: the improvisations have a unique emotional depth, and that feeling culminates with the closing unaccompanied duet between vibes and piano. In the hands of the MJQ, “Summertime”, so often considered a throwaway by jazz musicians, becomes a passionate cry. “Animal Dance” swings mightily with Heath and Kay’s malleable and energetic backing providing additional inspiration to Jackson and Lewis. The band seizes onto the sharp accented figures in Lewis’ composition, and Kay plays great cross-rhythms behind the solos. “For Someone I Love” is a Jackson tune dedicated to his wife, Sandra. It was recorded at the Lighthouse in 1967, but like “Summertime”, this version carries a special passion, not only in Jackson’s florid solo, but in Lewis’ accompanying lines. The pulse switches to waltz time for Lewis’ solo, and he marks the change with a strongly marked line in octaves. The mood gradually calms as the theme returns.

The ebullient “Golden Striker” starts softly with light Basie-like motives from Lewis, chordal improvisation from Jackson, a pedal bass line from Heath, and swing rhythm on Kay’s finger cymbals. The piece gains momentum through the repetition of the theme and throughout the duration of Jackson’s solo. Lewis’ solo brings the energy down for a moment, but by the time Jackson re-enters for a few bars of collective improvisation, the group is cruising like a finely-tuned sports car. To close the first half, the MJQ returns to “Porgy and Bess” with “There’s a Boat That’s Leavin’ Soon for New York” and “It Ain’t Necessarily So”. “Boat” is an explosion of rhythm. Each member plays a separate role in building the groove, which grows exponentially in the powerful shout chorus and exuberant solos. Kay is on fire, rapidly switching between a deep-pocket shuffle and cracking accents, which underlay all of the interaction between Jackson, Lewis and Heath. The energy must have surprised the members of the group, for we can hear them laughing with relief before starting the next selection! Kay is featured on “Necessarily”, playing fills over the stretched-out melody and changing tempo. And as the band slides into a slinky pace, someone (Jackson?) sings a bluesy line to encourage the group. The commentary continues as the tempo slows at the beginning of Lewis’ solo. Such vocal encouragements were not part of the MJQ’s usual concert etiquette, but on this night it seemed to just add to the special quality of the performance.

The second half of the concert opens with “Ralph’s New Blues” and it seems that the MJQ had no intention of toning things down for the remainder of the performance. The commentary resumes from the outset, with an “uh-huh” directed towards Percy Heath. Lewis backs up Jackson with counter melodies—Jackson apparently hated it when Lewis did that, but as happens here, Jackson played with more fire when Lewis used that device. Kay is the next soloist and it sounds like Lewis is egging the drummer on, with the others joining in as the drummer continues. Lewis starts his solo with a quote from “Chicago”, but the real fun happens a few choruses later when the typically restrained Lewis starts playing a boogie-woogie figure in his left hand! Heath concludes the solos with a funky episode accompanied by Kay’s tightly swinging brushes. The emotional intensity returns with vengeance in another selection from “Porgy and Bess”, “My Man’s Gone Now”. Lewis’ arrangement has places where the tension comes down (listen to their studio recording) but it seems that Kay is particularly keen to keep the intensity building up through the end of Jackson’s solo. Lewis’ unaccompanied piano solo provides that needed relief, but as soon as the band re-enters, the surging ostinato returns, building the performance to an effective climax. The gradual accelerando during the vibes and piano solos on “Winter’s Tale” moves to a fast tempo rarely attempted by the MJQ. The ensuing performance of “I Loves You Porgy” contains less fireworks than the other “Porgy and Bess” selections in the concert, but in his accompaniment and solo, Lewis brings back the blues feeling that had permeated “Summertime” (Jackson can be heard be heard snapping his fingers on the off-beats during Lewis’ solo). And the final theme statement seems to bring that blues feeling to the forefront.

Then it’s back to the blues, with a strongly grooving version of Ray Brown’s “Pyramid”. Kay’s press rolls energize the performance, raising the volume and deepening the swing played by the other members of the group. Jackson is particularly inspired here, increasing the intensity of his lines with each succeeding chorus. Kay’s engaging triple time figure and Heath’s resonant quarter notes fuel Lewis as his solo peaks and falls.  When Jackson returns, he repeats one part of the melody as if he wants to make a specific point out of this musical fragment. And as this powerful rendition concludes, Kay keeps the heat on with variations within his press rolls. “Home” sounds like a Blue Note funk tune, and the group digs into a dancing groove. There is a spirited dialogue between Jackson and Lewis, while Heath and Kay seem intent to show that rock & roll is part of their vocabulary too. “Blues Milanese” starts with a soulful Heath solo, and Heath’s ascending bass line plays an important role in the presentation of the theme. The group lands into a perfect medium groove, and there is a fine decrescendo after an active dialogue between Jackson and Lewis. With the concert coming to an end, the MJQ goes into its standard closers, “Bags’ Groove” and “Django”. Midway through his “Bags’ Groove” solo, Jackson hits a note with a sforzando accent to add a little life to an otherwise mundane rendition of this classic. Lewis also tries to spice up the activities by leaning into the rhythm during his solo. Perhaps the adrenaline was starting to wear off. Or maybe not: “Django” moves at a brisk clip, so fast that Heath can’t completely articulate the famous bass part every time it comes around. Kay is still full of energy, popping out snare accents and bass drum bombs to keep the group motivated. Lewis picks up on Kay’s power with a sharply accented solo, and then there is a quick ritard to bring the arrangement and the concert to a close.

“Concert in Japan” was issued in Japan as single LPs and as a double-record set. The 2-CD set pictured and referenced above may be the best edition of the concert. At present, several eBay sellers are offering two individual CDs of the concert, marked “Volume 1” and “Volume 2”. These albums—sporting full-color cover photos of the group from a few years later—are not recommended, since they do not include all of the concert tracks (Why would they leave tracks out? The whole concert is only 105 minutes, which fits easily on 2 CDs!) The 1992 box set “MJQ 40” (itself a rarity) includes four tracks from this concert, but oddly enough, they are the least representative cuts of this unique performance. While there might have been good reasons for Atlantic to not issue this concert back in 1966, the quality and rarity of this live recording makes it an important part of the Modern Jazz Quartet’s legacy. It shows the MJQ retaining their superb musicality, while revealing a little bit of their humanity.