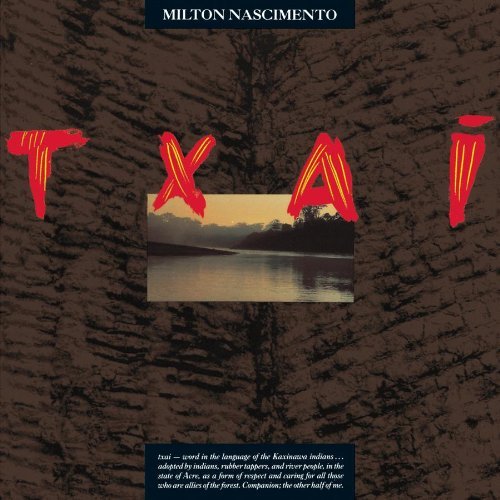 In Brazil, a composer as well as a lyricist is always acknowledged along with the interpreter of music. (This is something I’d love to see more of here in the United States.) For Milton Nascimento, a collaboration with Brazil’s great vocalist Elis Regina brought his jazz influenced, poetic style to the attention of several North American based record companies. His resulting international stardom and extremely loyal following made the recording “Txai” possible allowing him the opportunity to alert the world to the plight of ancient cultures living in and protecting the forests and rivers in the Amazon. This recording is a musical adventure from the depths of Nascimento’s heart, made possible by the help and collaboration of the NDI, (Nucleus of Indegenous Culture) who recorded the voices of the endangered people he loves.

“Txai” is a word from the language of the Kaxinawa Indians of western Amazõnia which is used between men indicating relationship. It translates roughly as “companion who is the other half of me” or “allies”. The women would use the word “txai-ta” for the same idea. In the context of this 1990 recording, the word is used just as the originators intended it; a term of respect for the relationship between those who are protecting the forest and the forest itself as a living entity. This recording is quite different from Nascimento’s other recordings. While researching the project, he traveled to Brazil and recorded the voices of the people and their musical instruments, and included excerpts throughout the recording. There is also a passage written and spoken by the late actor and close friend of Nascimento’s, River Phoenix.

Nascimento’s expressive falsetto vocals open the recording, accompanying a narrative by Davi Yanomami in Yanomami’s language. Following this immediately is the explosive, melodic and percussive title tune, “Txai”, with Nascimento’s distinct vocals flowing like the rivers he is singing of. “Baű Mètóro” fades in and grows, a rhythmic and mesmerizing warrior’s dance song comprised of only male voices. “Corsas da Vida” (That’s Life) immediately brings us back into modern culture with its soprano sax, electric keyboards and myriad of percussive instruments including lovely kalimba drum work by Ricardo Leão. The entire flow of the project proceeds with an intermingling of Nascimento’s vocals, strings, electric bass, keyboards and percussion with the unique and disappearing voices and instruments of the indigenous people.

There is one tune on this recording that never fails to bring a lump to my throat and warm my heart. It is called “Benke”, a song named for a young person of the Kampa people. On this song, the vocals are shared by Nascimento and the child Leonardo Bretus as well as a chorus of children. With Robertinho Silva along with his sons Ronaldo and Vanderlei on percussion, this is a very pretty piece expressing innocence and purity.  In the midst of the recording, positioned in a place where we have relaxed into the combination of modern and indigenous music, is the narrative written and spoken by River Phoenix, accompanied by “the indian” Tsaqu Waiã on vocals and flute. Another favorite track is “Nozani Na”, where the fascinating, clear-voiced Marlui Miranda, an authority on the music of Indigenous Northern Brazilian culture is accompanied vocally by Nascimento. The tune flits and dances, with a blending of vocals that is charming. Guitar, caxixi and tambor soprado are the only instrumental support here.

This recording may not be what fans of Milton Nascimento are accustomed to, yet it is an important historical expression of Nascimento’s passion to defend an area of the world that is delicate and being quickly destroyed, and for a rare chance to hear the untarnished sounds of a unique group of cultures, the people of the Amazon.