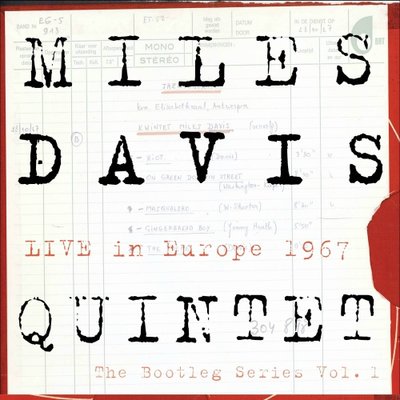 In the liner notes to the new Miles Davis reissue, “Live in Europe, 1967”, there are two quotes relating to the general climate of 1967 and Miles Davis’ place in it. The first, from Davis himself, states “Everything was in flux: music, politics, race relations, everything. Nobody seemed to know where things were going…[We] seemed to have more freedom…to do our own thing”, and the second, from promoter George Wein, “[The Quintet] wasn’t ahead of its time; it was the time”.

The quintet which Davis took on a Wein-sponsored European tour in the autumn of 1967 had been together for just over three years, and for them, improvisation was more than just creating a new melody over a set of chord changes; it could involve style, dynamics, tempo and form. All of the musicians were free to play on the chords, abandon them, or go back and forth between free and chordal improvising. Davis had been working on this approach all through the 1960s, but his quintet featuring tenor saxophonist Wayne Shorter, pianist Herbie Hancock, bassist Ron Carter and drummer Tony Williams were especially adept at making each performance a new experience.

Columbia/Legacy’s 3-CD/1-DVD package includes five concerts recorded over twelve days. The repertoire of each concert is similar, but it should surprise no one that the versions of the songs vary considerably from night to night. The group rarely came into a performance with preconceived notions, and they were very restless: in more than four hours of music, there’s hardly two minutes in a row where the background doesn’t change abruptly or evolve into something else. Basically, Davis would dove-tail the beginning of the next song over the coda of the last one; he would set the opening style, but it could (and usually did) go anywhere from there. In the wrong hands, such freedoms could lead to general cacophony, but not with this quintet: they never lose their direction or focus, and the music is stunning throughout.

I decided to listen to the concerts in chronological order, which meant switching between CDs and DVDs, but it also let me hear how the performances evolved between cities and venues. The quintet was on fire for the tour’s opening concert in Antwerp, but three nights later in Stockholm, the mood was quiet and reflective (the video footage of this concert is perhaps the best known documentation of the tour). As good as the 45-minute Copenhagen set is, it is dwarfed by the 90 minutes of music played in Paris. Finally, the explosive concert in Karlsruhe, Germany on the DVD is a dramatic contrast to the Stockholm footage.

With such a wealth of excellent music, it’s almost unfair to pick out highlights. Nevertheless, I would like to call your attention to the Copenhagen version of “Footprints”, where Davis seems to create his own lyric statement despite the tumult going on in the rhythm section, the Paris version of “The Theme” where Shorter and the rhythm section dart around each other with short pointed ideas, and the Paris version of “Masqualero” with Davis’ glorious Spanish-tinged solo, Hancock’s backing of Shorter with plucked piano strings, and Hancock’s stunning solo opening to his solo where he plays a single detached chord and lets the sound decay before continuing.

Carter is quoted in the notes as saying that the music developed night to night. While there are plenty of examples of that concept in this set, there is at least one great example missing. I have a bootleg DVD of the Stockholm and Karlsruhe concerts, and it includes a version of “Walkin’” from Karlsruhe that is inexplicably missing from the new DVD. On it, Shorter plays the very end of his solo unaccompanied; on the night before in Paris, he had played about two minutes of a cappella tenor in the same spot. The Columbia set is subtitled, “The Bootleg Series, Volume 1”, and I’m all for legitimate reissues of formerly pirated recordings; however, isn’t the basic idea to release all of the material so the bootleggers have nothing left to issue? I’m keeping my bootleg DVD for one performance. And that says nothing about the Berlin concert from this tour that has been issued on a bootleg CD, and is neither discussed nor included in this set.

Caveats aside, this is music for the ages, and a sterling example of a legendary jazz group creating masterpieces every night. Listen and learn—it’s sure to change your life.