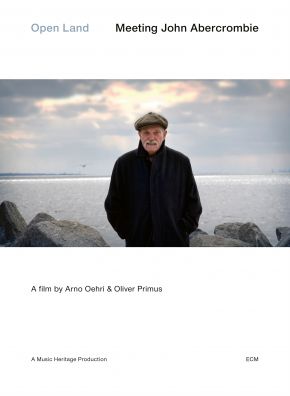 For listeners who know John Abercrombie only through his late recordings, the new Arno Oehri/Oliver Primus documentary, “Open Land: Meeting John Abercrombie” offers an amiable living snapshot of the guitarist in his later years. ECM, Abercrombie’s home label for over four decades, distributed the home video, and the documentary bears a stunning likeness to Manfred Eicher’s recordings. It is as beautiful visually as it is musically, leisurely paced with stunning footage of New York City and of Abercrombie’s country home upstate. Ten of Abercrombie’s recordings are featured on the soundtrack, and director Oehri wisely lets the music play without interviews or other sounds. Oehri rhymes references to Abercrombie’s debut recording, recorded with an organ combo in 1968, with a 2014 live performance featuring Abercrombie with organist Gary Versace and drummer Adam Nussbaum. The concert footage is captured with multiple cameras, giving us long close-ups of each musician, and an overhead camera which displays Nussbaum’s graceful technique.

At the time Oehri and Primus filmed Abercrombie, there were no major events looming in the guitarist’s life, so the filmmakers apparently decided to make the film into a biography. They let Abercrombie tell his own life story, but the guitarist omitted essential sections of his autobiography. This is where long-time Abercrombie fans will find numerous problems with the film. For example, Abercrombie seems very modest about his own technical capabilities on the guitar. He claims that no one listened to him when (as a Berklee student) he played intermissions at a club in Boston, but print interviews with the guitarist reveal that organist Johnny (Hammond) Smith hired him for his trio after hearing Abercrombie at the club. When Abercrombie tells about his debut recording (which really wasn’t his first—Tom Lord’s “Jazz Discography” lists him on a Berklee recording three years earlier), Abercrombie only mentions one musician by name: George Benson. The record’s producer wanted the then red-hot Benson to appear on the album, and Abercrombie agreed, since he believed Benson to be the better player. However, Benson was unable to make the recording so Abercrombie was hired again. Abercrombie was understandably nervous, but regained his confidence when the band’s drummer complimented his solo during a studio playback. That drummer was Grady Tate, and in addition to the leader, the band also included tenor saxophonist Houston Person. That’s fast company to be sure, but the recording shows that Abercrombie was actually up for the challenge. Abercrombie was never a big name-dropper, but why not acknowledge that he was working with major musicians?

When Abercrombie moved to New York in 1969, he played with some of the hottest musicians of the era, including Michael and Randy Brecker, Herbie Hancock, Gato Barbieri, Billy Cobham and Gil Evans. According to a Downbeat interview, the guitarist was frustrated with the large venues and restricted harmonic challenges of jazz-rock fusion, and decided to seek out a more cerebral approach to contemporary jazz. His 1975 ECM album “Timeless”, a trio session with keyboardist Jan Hammer and drummer Jack DeJohnette, shows that Abercrombie was a monster technician with strong chops in postbop and rock genres. The opening track of the album, “Lungs”, starts with a blazing 3 ½ minute series of improvised bop exchanges between Abercrombie and Hammer, with DeJohnette furiously stoking the flames. Later, the tempo slows and the guitar and organ provide a sustained background for the drum solo. The final section is in funk style and it shows the guitarist’s deep feeling for contemporary styles. Thus, in a single track, we can hear a summary of Abercrombie’s talents; however, none of this information appears in the video. The only clip from the “Timeless” LP is the hypnotically droning title track, which was doubtlessly a turning point in Abercrombie’s style. There is also a brief interview where Abercrombie talks about having a bunch of wah-wah and fuzz pedals for his instrument, but that he no longer uses those effects boxes. Why leave the rest of this fascinating story out? I suppose that Abercrombie didn’t want to upset Hancock, Brecker and Cobham by making disparaging remarks about jazz-rock fusion, but on the other hand, all of these musicians have changed their styles over the years, so why would they neglect Abercrombie the right to change his?

Late in the film, Abercrombie tells us of a devastating fire in the early 21st century that destroyed his country home and almost all of his possessions. The simple fact that every object we see in Abercrombie’s new home was acquired in the past decade should send shock waves to every viewer, and it should have done the same for the filmmakers. Abercrombie notes that a guitar company supplied him with a new instrument within days of the fire, but he also admits that he didn’t play professionally for several months. But what about the rest of his recovery? If the local fire department couldn’t save his house because the roads were ice-packed, why did he decide to find a new country home? Did he have insurance for his belongings? Were there copies of his original compositions stored elsewhere? Was he able to restore his collection of recordings? Abercrombie says “it was just stuff”, but from the scenes shot inside his new home, we can see that he has a lot of new stuff.

I can’t fault Abercrombie, Oehri and Primus for focusing on the guitarist’s ECM recordings. Indeed, his later music has grace and subtlety that was notably absent in his earlier recordings. No aging artist should feel the constant need to dazzle an audience with flashy runs and burning tempos. Abercrombie found something deeper within his later musical style, and he was wise to pursue that artistic direction. However, if we bring in the knowledge (and love) of John Abercrombie, the young guitar firebrand of the late Sixties and early Seventies, we can experience a greater appreciation of Abercrombie’s gifts than this documentary reveals. Further, had the filmmakers encouraged Abercrombie and his wife to speak of rebuilding their lives after the fire, they might have had a better narrative than the edited autobiography provided by the guitarist. Abercrombie passed away in 2017, and so he has no further opportunities to tell the full version of his life story. By leaving out the material about his early years in New York and his latter-day recovery from the house fire, Abercrombie omitted two of the best chapters.