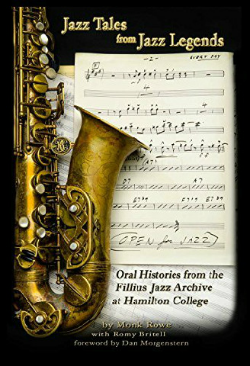 In May 1938, Alan Lomax invited Jelly Roll Morton into the Coolidge Auditorium at the Library of Congress to record recollections of his career. The recordings represented the largest effort accomplished to date in a genre now known as jazz oral history. Many listeners were turned off by Morton’s numerous historical exaggerations, but closer listening revealed that several of his recreations of earlier performers were, at the very least, plausible, and might have been fairly accurate. In 1955, Nat Hentoff and Nat Shapiro published the book “Hear Me Talkin’ to Ya”, which told the story of jazz history entirely through the words of its musicians. While the book remains one of the cornerstones of jazz literature, a few scholars have noted that the quotes were sometimes edited for greater readability (The editing may not have been solely the work of Hentoff and Shapiro, as they lifted some of the quotes from magazine articles). Over the past few decades, jazz oral history projects were launched by the Institute of Jazz Studies at Rutgers, and the Smithsonian Institution. A new book, “Jazz Tales from Jazz Legends” (Couper), offers excerpts from a lesser-known source, the Fillius Jazz Archive at Hamilton College. Author Monk Rowe is the director of the archive, which contains over 325 interviews, and in the preface he writes that the quoted “excerpts are presented with only minor edits for readability. No words or concepts were inserted or modified”.

Rowe’s approach lets the musician’s voices speak from the page with remarkable clarity. Maria Schneider offers a perceptive quote on maintaining balance between music and life, Jimmy Lewis tells a harrowing story about riding in a military transport plane with the Count Basie Orchestra, and Sonny Igoe does his best to rehabilitate the long-tarnished image of Benny Goodman. Rowe shows a particular fondness for big band swing, and he also makes room for discussions of Glenn Miller, Stan Kenton and Doc Severinsen’s “Tonight Show” band. The archive started through the assistance of vocalist Joe Williams, and in addition to providing his own memories, Williams also conducted a few of the interviews himself, eliciting Clark Terry’s vivid memories of a racially-charged beating he received in the early days of his professional career (alternate versions of this and other Terry stories can be found in the late trumpeter’s autobiography). The book does not follow historical chronology, but focuses on individual topics, such as life on the road, arranging, improvisation, racism, song titles, and women in jazz. This allows Rowe to juxtapose the experiences of musicians of different generations, and in the process, reveal the wide historical breadth of the Archive’s collection.

There are a few places where Rowe should have made judicious edits and clarifications. Late in the book, Annie Ross tells how Prestige’s Bob Weinstock asked her to write vocalese lyrics to Wardell Gray’s “Twisted”:  “Moody’s Mood” had just come out. And he said to me, “Do you think you could write words to an instrumental like Eddie Jefferson did?” [Eddie having done “Moody’s Mood for Love”]. So I said, “Yeah”. I mean if you’d ask me if I could fly I would have said yes. So he said, “Well, here’s a pile of records, go back to your place, pick one, write the words, when you’re ready, come to me”. Well, I was sharing a floor, I had a room in this big building where you shared the kitchen, you shared the bathroom and it was—yich. And so I was there the next morning with “Twisted”.  The change from Ross’ quote of Weinstock’s directive to the description of her living space was so abrupt that I read the passage over again to be sure I didn’t miss something. While Ross later explains that her purpose in writing the lyrics was to get out of that apartment, the passage could have been edited to keep Weinstock’s commission and Ross’ quick response together, with the reason for her speedy work moved or omitted.

Unlike “Hear Me Talkin’ to Ya”, Rowe adds commentary throughout the book to connect the various quotes. Most of these insertions work perfectly well, but at times Rowe seems too anxious to move forward and he fails to make his own points. For example, in a discussion of whether jazz musicians can play wrong notes while improvising, Rowe states that he has heard wrong notes in recordings by Miles Davis and Dizzy Gillespie. Rowe states if Miles Davis played a note, with that fragile tone of his, it took on a certain extra poignancy, whether or not he intended it. When Dizzy Gillespie played a questionable note…he was entitled. After all, he was Dizzy Gillespie and he was making jazz history.  I would argue that Miles Davis was also making jazz history with his “questionable” note, and that Dizzy Gillespie, with his thorough knowledge of harmony could—as Miles frequently did—make a wrong note work within the context of his solo. As the passage stands, we’re really not sure how Rowe feels about either trumpeter; a simple rewrite would have fixed the problem. The same chapter offers conflicting views on whether jazz improvisation can be taught. Several of the interviewees express skepticism about Jamey Aebersold’s slogan that “Anyone Can Improvise”. Yet, it appears that Aebersold (alive, well and an NEA Jazz Master) was never asked to do an interview so that, within the context of the book, he could defend his method alongside his detractors.

Despite these minor quibbles, it is very clear that the Fillius Jazz Archive at Hamilton College is a valuable resource for jazz historians. The videotaped versions could prove to be much clearer than their transcribed versions (and to be fair, we listen to stories in a vastly different way from the way we read them). Monk Rowe has provided an essential service in collecting and sharing the memories of great musicians. Purchases of “Jazz Tales from Jazz Legends” will finance the continuing work of this important resource. That is something of which Alan Lomax, Nat Hentoff and Nat Shapiro would certainly be proud.