Jazz in China (by Eugene Marlow) 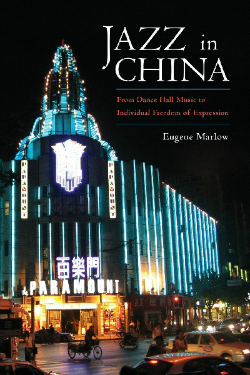 The workings of a jazz group are often compared to a democracy in action. Each member of the group can express themselves freely, but everyone must work together to enrich the ensemble. For the aspiring jazz artist raised in a democracy, the jazz model is an easy fit. However, would-be jazz musicians who grew up in Communist countries must adapt their entire life philosophy to embrace the music. As Eugene Marlow writes in his pioneering study, “Jazz in China” (University Press of Mississippi), China has a long history over thousands of years of adherence to a central authority—whether the emperor, the dictator, or the one-party rule. This mindset pervades Chinese society from the highest levels of government to the family unit, in the urban centers and the countryside. While in the West, the individual is paramount; in China the central authority is paramount. Marlow’s study focuses on these two attributes: how Chinese jazz musicians have struggled to find their individual voices, and how the Chinese government has controlled the spread of jazz in the past century.

Marlow’s book is split into two large sections: “Before Mao” and “During and After Mao”. Despite John Adams’ fanciful scene, “The Chairman Dances” (from the opera “Nixon in China”) Mao Zedong had little interest in jazz or dance music. From the Chairman’s takeover of the government in 1949 to his death in 1976, jazz was essentially outlawed. The jazz scene in Shanghai, which flourished since the late 1920s was completely decimated by the early 1950s. After Mao’s death, jazz started to come back to China, now in the two metropolises of Shanghai and Beijing. While the Chinese musicians are quite optimistic that their form of jazz will continue to grow in popularity and artistic scope, Marlow is quick to note that politics will undoubtedly play a role in Chinese musical development.

Marlow paints a broad picture of the pre-Mao music scene, including in-depth explanations of how political events like the two Opium Wars and the Japanese invasion of Shanghai affected the proliferation of live music. Shanghai’s clubs and hotels attracted musicians from all over the globe, including Americans like drummer Whitey Smith, pianist Teddy Weatherford, and trumpeters Valaida Snow and Buck Clayton. There were also several bands of musicians from the nearby Philippines, and eventually all-Chinese jazz ensembles. There are no recordings of any of these groups, so we don’t really know whether they swung, how well they worked as ensembles, or if any of the native musicians were skilled improvisers. However, Marlow has uncovered a rare first-person account by Chinese bassist Da Ren Zheng, which provides valuable information on the most popular jazz groups of the pre-Mao era, their repertoire (which included American pop as well as Chinese folk songs) and their personnel. Zheng also comments on the high salaries that the musicians received as part of a growing jazz scene.

The second half of the book is considerably longer than the first, but not nearly as informative. From research he made on trips to China in 2000 and 2006, Marlow attempts to provide the same sort of panorama of post-Mao jazz as he had of the pre-Mao period. He does a very good job of chronicling important visits from American musicians, like Willie Ruff, and in discussing the main nightclubs in Shanghai and Beijing. An interview with composer-bandleader Liu Sola is arguably the most enlightening chapter in the book’s second half, as she describes the difficulties of teaching Western notation and jazz improvisation to Chinese musicians. While a few jazz schools have opened in China during the past few years, the overall music scene seems to suffer from a lack of musicians dedicated solely to jazz. We hear of many musicians who play jazz part-time, but also play in rock bands to supplement their income. And while China now has a recording industry, no one involved seems very interested in capturing home-grown jazz. As with the dwindling recording scene elsewhere in the world, most jazz musicians must record and distribute their work on their own.

In the final chapters of the book, Marlow attempts to bring his decade-old research up-to-date with a series of thumbnail profiles of current Chinese jazz musicians. Unfortunately, most of these profiles are little more than extended quotes from the artist’s websites and publicity sheets. While the web can be a very useful research tool—even transmitting live performances to audiences living far away—it is not a valid substitute for experiencing a music scene in person. Clearly, as the completion of the book drew further from the time of his last research trip, Marlow needed to make another voyage to China to update his study. It would have made his book much more relevant than in its present form. Marlow has noted that a DVD documentary is in the works, and that the video will answer some of the lingering questions posed by his manuscript. That’s all well and good, and I hope that the film is released and lives up to its promise. However, Marlow’s book is of uneven quality—understandable for a first book on any subject—and we will have to wait for further volumes (perhaps by an author who lives in China) to learn more about this fascinating subject.