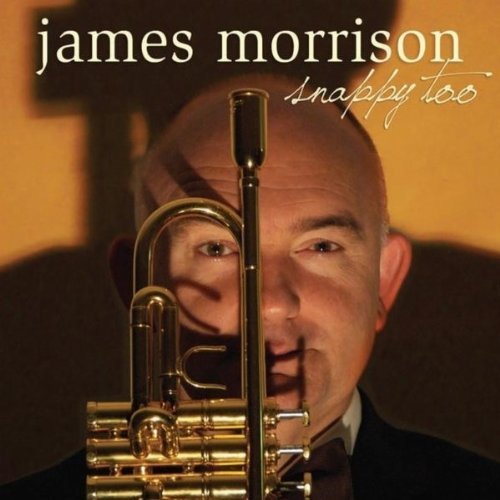 Remember the old Maxell commercial where the guy in leather jacket, scarf and shades clutches to his easy chair as he sits inches from his stereo while his hair and scarf are blown back by the rush of air being forced through the speakers? Get ready for the same intense rush when you listen to James Morrison’s new big band CD, “Snappy Too”. The album contains exciting arrangements, tight section work and superb solos; all recorded in state-of-the-art sound. In short, it’s everything you’d expect from a 17-piece big band. But while there are 17 pieces, there are only 2 musicians: Jeff Hamilton plays the drums, and James Morrison plays everything else—5 saxes, 4 trumpets, 4 trombones, piano, guitar and bass. Plus, he composed 6 of the tunes, and arranged 10 of the tracks. Clearly, this man is way too talented. .

Before dealing with Morrison’s extraordinary feats of musicianship and overdubbing, let’s talk about Jeff Hamilton. A jazz drummer has an interactive relationship with a big band. The drummer will play a small figure to “set up” the ensemble figures and the musical reaction of the band keeps the interaction going. Hamilton, one of the best big band drummers in the world, had an unusual challenge: in an LA studio, he played to the pre-recorded tracks that Morrison had made in Sydney, so instead of initiating the interaction, he had to react to it, but still make it all sound like a live band. Morrison did record some of his improvised solos as Hamilton contributed his tracks, but for the most part, Hamilton played to a “phantom” band. He does it all so well that you’ll never notice the seams. More importantly, his inventive playing adds fire and energy to an already exciting ensemble.

To record this phantom band, Morrison started by laying down the lead trumpet tracks, which dictated the style for the rest of the parts. After the rest of the trumpet parts were recorded, he recorded the saxophone section starting with the lead alto (another leading role in a traditional big band). Then the trombone tracks were laid down before the rhythm parts. The section work is nothing short of amazing. The attacks and releases are remarkably precise, as are the subtle nuances of the phrases, and those elements add immeasurably to the excitement generated by this record 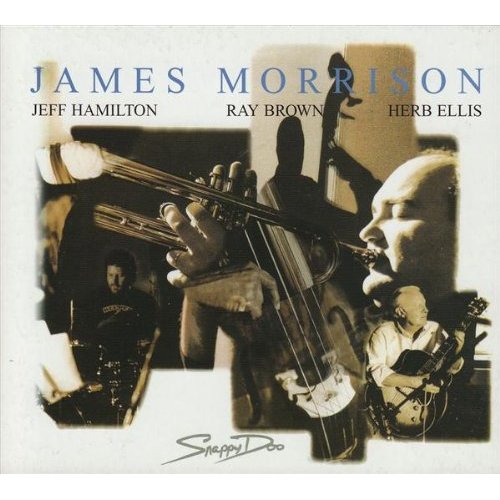 ing. I’m also quite impressed with Morrison as an improvising soloist. It doesn’t sound like the same person playing the tenor sax, trumpet, bass, and trombone solos, and while I wouldn’t call Morrison a ground-breaking soloist on any of his instruments, I admire the fact that he has developed unique voices on each instrument.

As the album title implies, “Snappy Too” is a sequel. Morrison’s first multi-tracked big band album was “Snappy Doo”, released by Atlantic in 1990. That album had a mixture of brass ensembles, small group pieces and big band tracks, whereas the sequel is nearly all big band with single tracks of a bass trumpet/guitar duet and a phantom Dixieland group added for variety (Morrison added clarinet and banjo to his arsenal of instruments for the latter track). The earlier album featured the rhythm section of guitarist Herb Ellis, bassist Ray Brown and drummer Hamilton. Since Ellis and Brown have both passed away in the intervening years, Morrison played those parts himself in tribute.

Morrison has made a promotional video for “Snappy Too” where his multiplied image is shown playing all of the instruments. For any silent movie fans, the video brings back the memory of Buster Keaton’s short “The Play House”, where Keaton played all of the musicians in the orchestra pit, all the players on stage and the crowd in the audience. Of course, Keaton was not a musician, and there’s no telling of the cacophony he raised while creating this scene. We can hear James Morrison’s efforts though, and they are mighty impressive. Just load the CD into your stereo and hold on to your chair.