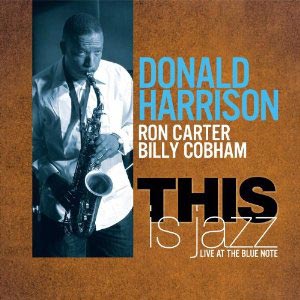 Donald Harrison appeared in the documentary “Icons Among Us: Jazz In The Present Tense” and seemed to be one of the more conservative players in the film. However, his new CD with Ron Carter and Billy Cobham, “This Is Jazz: Live at the Blue Note” (Half Note 4550) shows Harrison pushing the boundaries of the music and his own musical persona. Without a chordal instrument present, Harrison is free to take chances with intonation and harmonic choices. His lines have an elastic feel, reminding me of both Ornette Coleman and Lee Konitz. The open structures require attentive listening across the bandstand and the free interplay allows for unexpected musical episodes, such as the down-home blues feel that springs up in the middle of Harrison’s solo on “MSRP”. Cobham gets an interesting mix of sounds on his drum kit, with the extra-crisp sound of his snare contrasted with the open hollow sounds of his toms. Carter is, as always, a flexible and sensitive center of the group. His rich tone and flawless technique are displayed on a solo version of “You Are My Sunshine” that must stand as one of his finest recorded solo performances. Carter brings the band back in as he segues into “Seven Steps To Heaven” which features brilliant interplay between Harrison and Cobham before the drummer takes an extended solo that is kept in meter by Carter’s double- and triple-stopped motives. I suspect I would be more impressed with Harrison’s version of “I Can’t Get Started” in a different setting. There are fleeting attempts to incorporate the freer playing style to this ballad, but most of it is fairly straight-forward. It is as if Harrison is still trying to find a way to let the free style permeate his music. The concluding piece, “Treme Swagger” is a group improvisation over a New Orleans parade beat. Harrison’s solo is filled with funky lines which sometimes morph into something sounding like Middle Eastern music. The tempo drags here and there, but Cobham re-energizes the proceedings with a superb drum solo that works around the existing rhythm pattern.

Phil Woods has played professionally since the early 50s, and he is rightly considered as one of the great jazz improvisers. His composition-like improvisations and pure sound were a hallmark of his early style (hear his astonishing chorus on Quincy Jones’ “A Sleepin’ Bee”), but as he has aged, his sound has coarsened and he has let his vibrato widen. I’ve heard some mighty unmusical sounds from Woods’ horn in recent years, but on his new duet CD with pianist Bill Mays, “Phil & Bill” (Palmetto 2150), he uses that raw sound to reveal an emotional intensity rarely heard in his work. Mays has several duet albums in his discography (including an unjustly rare LP with Bobby Shew), and he has an uncanny ability to create a full piano sound even when improvising in single lines. There are abundant standards in the track list, both obscure (Richard Rodgers’ “Do I Love You Because You’re Beautiful?” from “Cinderella” and David Rose’s “Our Waltz”) and well-known (a lovely rendition of Gershwin’s “How Long Has This Been Going On?” with Mays’ superb interpretation of the verse, and a 5/4 version of “I’m All Smiles”). Woods’ two originals are both dedicated to recently passed jazz musicians. “Blues For Lopes” is a gritty, angular blues that memorializes Joe Lopes, a childhood friend who later played in the New York and Los Angeles studios and was a founding member of Supersax. “Hank Jones” reflects the elegance of its subject in its long melody line and graceful improvisations. I doubt that I’ve ever heard a more anguished cry from Woods’ horn than on the Al Cohn ballad “Danielle”. The song seems to bring out deep emotions from the saxophonist and although there are no liner notes included in the CD package, the music speaks volumes on its own.