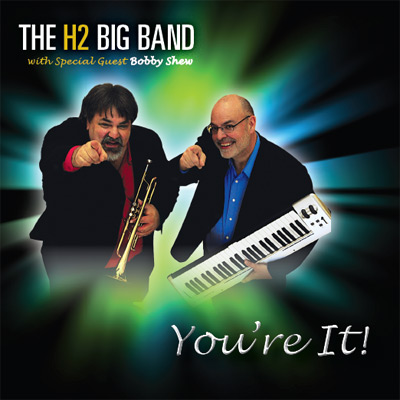 In any musical group, there is an important concept known as ensemble.  Ensemble is an umbrella term for everything that goes into the group playing together. Not only must the individual notes begin and end with precision, they must be interpreted as a group. Any infraction, no matter how slight, lessens the effort of the group. There are plenty of examples of superior ensemble playing: the Count Basie band, the Netherlands Wind Ensemble, the Robert Shaw Chorale, etc. However, many groups perfect their ensemble technique by playing together on a regular basis. In the case of the H2 Big Band co-led by trumpeter Al Hood and pianist Dave Hanson, the hand-picked group achieves a remarkable ensemble with an absolute minimum of rehearsals and performances together.

The band’s debut CD “You’re It” has just been released by Jazzed Media. Most of the musicians are from the Denver/Boulder area, but three of the five trumpets are from out of town, as is one of the saxophonists. Without question, the musicians know each other and have gigged together in various combinations, but never all in the same big band. There was one rehearsal for the CD, followed by two days of recording. Most of the final recordings were achieved with a minimum of takes, and the results—especially the ensemble playing—are spectacular.

All of the arrangements are by Hanson, and while many of them fall into the tradition of post-WWII big band jazz scores, they still provide plenty of challenges to the musicians. “Blue In Green” is in 7/4 time (interesting how this unusual approach to the Miles Davis tune is part of this album and Gretchen Parlato’s new disc—I’m fairly confident that each found the concept independently!), “Romanza” is a Gil Evans-inspired Hanson original that requires great instrumental control by both the band, and soloist Hood, and “Joy Spring” features the trumpet section in a harmonized version of Clifford Brown’s solo from his lesser-known Pacific Jazz recording.

This may be the most democratic big band in jazz history. In most big bands, there are a few soloists and the rest of the band plays the written parts. Not so here. The musicians were all picked for their capabilities as soloists as well as their ability to add to the ensemble. So, every member of the band gets a solo somewhere on the album (except, oddly enough, for bassist Ken Walker; no one explains why, but they rightly acknowledge his fine work as anchor of the rhythm section). The all-important lead trumpet part—more often than not, the one who leads the ensemble by example—is split between three different players, but you won’t hear the difference as they change roles.

In the liner notes, Hood and Hanson praise the solo work of all of their colleagues, so a brief set of album highlights will suffice here. The opening shuffle, “Blue Brews” is grounded with Todd Reid’s superb drumming and Mike Rodriguez’s trumpet solo effectively stretches the harmonic base. Bobby Shew and Al Hood have a good-natured trumpet duel on the title cut, and “Singin’ In The Rain” features a well-played theme statement and variation by a small group of horns, and an excellent alto solo by Rich Chiarluce. The Buddy Rich-inspired “BMG” has solos by tenorist Bob Rebholz and Shew, but the band steals the show with astoundingly precise and—very exciting—ensemble playing. Hanson gets a rich palette of sound from the group on “For Claus”, which stems from one of composer/arranger Claus Ogerman’s unique chord voicings. I’ve always had a problem with Cy Coleman (he seemed so consciously smug), but Hanson’s arrangement of “Big Spender” is great fun, and the duet between Hood and trombonist Nelson Hinds is full of good humor.

Of the remaining pieces, “Double Doubles”, and the aforementioned “Blue In Green” and “Romanza” are the most progressive, challenging the players  with, respectively, difficult chord progressions, odd and shifting time signatures, and thick harmonic textures. Hanson, alto saxophonist Wil Swindler and flugelhornist Jason Carder all acquit themselves well on “Doubles”; trumpeter Brad Goode emulates Miles at the beginning of “Blue In Green” but soon demonstrates how his own harmonic lexicon has expanded on the master; and Hood displays his moody, avant-garde solo style on “Romanza”. There are a couple of duet passages on this track by the co-leaders and they are exceptionally well-played.

By far, the liveliest playing on the disc happens on “Al’s Well” and “Joy Spring”. The former is an up-tempo swinger featuring the band’s two Al’s: trombonist Al Hermann and trumpeter Hood. Hermann is the one of the mainstays of Denver’s jazz scene—rather quiet and unassuming on the surface, but on stage, an inventive and swinging player that raises the artistic level of every group in which he plays. Hood and Hermann find a great chemistry on this track and their duet near the end of the track is a cause for celebration. “Joy Spring” is the album closer, and after the trumpeters blaze through the harmonized Clifford Brown solo, Hood leads off a long and exciting series of solos where all five trumpeters are featured, and each in his own way pays tribute to the composer.

Eight months after the recording session, Hood and Hanson, who both teach at the University of Denver’s Lamont School of Music, reassembled the band at the college for a concert performance. Nearly all of the band was there (quite a feat considering the busy schedules of these performers!), and the subs—including the versatile Pete Olstad, filling in for Shew—all played like veteran members of the band. With little rehearsal time to both refresh the memories of the players that recorded this music and to acquaint the subs with it, the band’s concert was as impressive as the CD, with all of the tight ensemble work intact. In fact, they played like they had been working together every night since the recording. And that may be the best compliment I could offer.