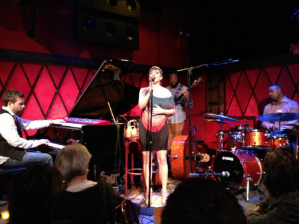 It is no small feat for an artist to grow and innovate while paying homage to the jazz tradition. These opposing traits have led to recent debates on the nature and definition of jazz. While the vocalists who channel their inner Billie Holiday (some with meticulous accuracy, their twenty-year old physical forms belying their old souls) tend to be more easily received by audiences and critics, it takes a certain amount of courage and audacity to stretch the boundaries of jazz and charter unknown territory. One vocalist whose creativity excites and inspires me is Gretchen Parlato, a singer well known for her lilting, soft-toned vocal stylings and her blend of jazz, hip hop, pop and R&B genres. This week, she performed two shows at New York City’s Rockwood Music Hall as she recorded a live CD and DVD. Rockwood’s plush red interior and Parlato’s phenomenal lineup set the scene for an intimate and spirited performance.

The evening featured what Parlato called the “two configurations” of her touring band and “the core” of her music. Parlato and her band tour extensively and it was fascinating to hear how the often-performed repertoire has grown and developed over a multitude of concerts. Parlato’s cover of SWV’s “Weak” opened the set and it was immediately apparent that the musicians were reveling in space, sonic interaction and true spontaneity. Kendrick Scott’s clean attack on the drum kit was familiar but never predictable. He would often drop out and then re-enter, never letting time lapse. Burniss Earl Travis’ use of electric bass on this tune was particularly effective and stylistically appealing. It also provided nice contrast when he moved to acoustic bass for tunes like Francis Jacob’s “On the Other Side” (from Parlato’s second album, “In a Dream”). Parlato noted that Travis had started playing with her in March of this year and knew all her music after about two gigs on the road. Clearly, Travis is a kindred spirit and a perfect fit for Parlato’s brand of jazz. I had my reservations when two slower, R&B-infused tunes (Lauryn Hill’s “All That I Can Say” and “Better Than”) were played one after another. However, Parlato’s original composition “Better Than” had developed so beautifully since I last heard it that I completely forgot we’d been in ballad territory for a while. Parlato had the audience sing along on a newly created recurring motive that wove in and out of the arrangement. This new aspect only added to her spellbinding rendition.

Many critics focus on Parlato’s breathy style of singing but they fail to recognize that Parlato is acutely aware of her delivery of both lyrics and wordless, improvised phrases. And her feathery tone is merely one facet of her vocal technique. When improvising, she adopts a direct, breathless tone and the flexibility and range of her instrument is all at once apparent. These traits were very much on display with awe-inspiring solos on Djavan’s “Flor De Lis” and Simply Red’s “Holding Back the Years”. It’s impossible to mention the above two songs and not take note of Parlato’s musical kinship with pianist Taylor Eigsti. Eigsti’s playing is simultaneously sensitive, supportive and present. He solos with immense agility and panache, and as an accompanist, he introduces succinct repeated phrases that compliment and highlight a drum, bass or vocal line. His ostinato patterns were particularly effective at the end of Wayne Shorter’s “Juju”. The song appeared on both Parlato’s self-titled debut album (in a medley with “Footprints”) and her recent, critically acclaimed record “The Lost and Found”. Tonight’s performance was utterly mesmerizing, almost trance inducing.

By this time, the rhythm section had changed to Alan Hampton on bass and Mark Guiliana on drums. As a long-time admirer of Parlato’s music, I felt a tad nostalgic seeing Hampton playing bass again. Her most recent album saw Derrick Hodge hold down the bass position so it was nice to revisit this particular personnel. Hampton opened “Juju” with the expected bass line only to steer the tune in a different direction from both album versions. With Eigsti’s harmonic input, the song displayed quite dark undercurrents and the use of a pedal point at several stages breathed new life into the song. “Alô, Alô”, usually Parlato’s solo tour de force, benefited from the percussive input of Giuliana on kit, Eigsti on the piano lid and Hampton on the body of his bass. It was also incredibly fun to watch them get percussively creative with their instruments all while Parlato, not skipping a beat, played her televi shakers with focus and sung on.

The evening closed with Hampton and Parlato’s co-creation, “Still.” Hampton wrote the music and Parlato contributed the lyrics to this deceptively simple, highly catchy tune. With Hampton switching to guitar, Travis returned to claim the bass and Scott joined in on an extra snare drum. The performance of this song perfectly captured the magic of Parlato and her band. There was so much joy in the delivery of this beautifully crafted tune that the already content audience couldn’t help but share in the feelings of admiration and love that Parlato and her band were celebrating on stage.

The album and DVD will be released in early 2013. For more information about Parlato’s upcoming performances, visit gretchenparlato.com