The above title is not a reference to Spinal Tap’s amplifiers. Rather, it designates the size of the ensembles featured in this month’s Instrumental CD Reviews. All of the discs are lead by pianists, and all but the first are centered around rhythm sections. In keeping with the title, the reviews are arranged from smallest to largest group, rather than our usual alphabetical order.

FRED HERSCH: “{open book}” (Palmetto 2186)
It’s easy to get immersed in Fred Hersch right now. His autobiography has just been published (to be reviewed in the next issue of JHO), he’s performing his Walt Whitman suite “Leaves of Grass” at Jazz at Lincoln Center later this month, and several of his albums have being reissued. With all of this activity, his 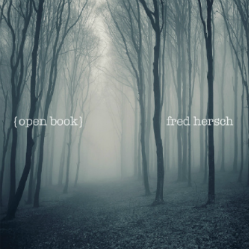 new solo CD, “{open book}” could get lost in the shuffle. After all, it is Hersch’s 11th solo album, and listeners might ask what more Hersch could say in a solo context. But there is something new here: a nearly 20-minute improvisation recorded at an afternoon concert in Seoul, South Korea. Hersch was jet-lagged, and he overslept prior to the concert. Running on caffeine and adrenaline, he improvised without any preset framework. The piece, “Through the Forest” is placed in the exact center of the CD program, and it is a fascinating look into Hersch’s psyche. Surprisingly, it is not a jazz improvisation; rather it is a free fantasy through the classical music of the 20th century. I hear snatches of Debussy, Ravel, Stravinsky, Schoenberg and Bartók, and I wonder if the audience thought they were hearing an obscure modern work rather than an improvisation. Hersch returned to the same concert hall a few months later to complete the album. While the rest of the pieces are comprised primarily of jazz standards and originals, Hersch’s performances seem informed by his earlier improvisation. Benny Golson’s “Whisper Not” is particularly edgy with the opening melody winding through intricate counterpoint, and Tom Jobim’s “Zingaro” receives a flowing interpretation that sounds (at times) like a Debussy prelude. Thelonious Monk’s “Eronel” receives the most straight-forward jazz treatment, but even here, there are several places where Hersch improvises brilliant counter-melodies to Monk’s original tune. The closing track is Billy Joel’s tender ballad, “And So it Goes”, and while I’ve heard many renditions of this song, I don’t recall one that touched me as much as this one. He emphasizes the recurring motive of the theme, and then he improvises a glorious new melody that complements the heartfelt emotion of Joel’s original melody. The passion Hersch injects into this powerful song shows why he is one of jazz’s most treasured performers.

BILL CHARLAP TRIO: “UPTOWN DOWNTOWN” (Impulse 27231)
Called “a fixture of the New York jazz firmament,” the Bill Charlap Trio’s new CD “Uptown, Downtown” is not a concept album about the Big Apple, but the kinetic energy present from the opening track emulates the feel of Manhattan. The stop-and-go feeling of G 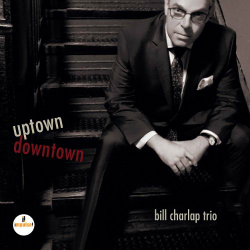 erry Mulligan’s “Curtains” reminds me of the ever-present city traffic, and the animated three-way conversation between Charlap’s piano, Peter Washington’s bass and Kenny Washington’s drums sounds like a passionate discussion in a downtown bar. The trio has played together for 20 years, and that longevity translates to nearly-intuitive communication. Their version of “I’m All Smiles” has a marvelous sequence where all three musicians play sparse lines, presumably to ensure that everyone in the group can play a part in the interplay. On “Spring Can Really Hang You Up the Most”, Peter Washington plays a very spare countermelody to Charlap’s melody statement and improvisation. It’s so subtle that it could be missed entirely, but it adds just the right touch to enhance the pianist’s statement. And speaking of subtleties, on the trio’s leisurely take of “There’s a Small Hotel”, listen for a distinctive bass motive in the opening chorus which later finds its way into Charlap’s solo. On the title track, Kenny Washington sets up a sassy backbeat over which Charlap performs a tasty improvisation notable for substantial dynamic shifts and several diverse elements which somehow coalesce into a unified solo. The trio swings with overwhelming power on the Gigi Gryce opus, “Satellite”, and with refined elegance on Jim Hall’s rarely-heard “Bon Ami”. The closer is Duke Ellington’s “Sophisticated Lady” which opens with Charlap quoting several of the composer’s favorite devices. But then the band kicks into a medium-fast tempo, which takes the song into unexpected territory. Like the thoughtful version of “On the Sunny Side of the Street” which closed the trio’s prior CD, “Notes from New York”, this unusual rendition makes us reconsider a classic jazz standard. This is an album which rewards close listening.

ANNIE BOOTH SEXTET: “ABUNDANCE: LIVE AT MIGHTY FINE” (AB 117)
I first heard Annie Booth in a trio setting at the Denver nightclub, Nocturne. While I appreciated her approach to standards, I was most impressed with her compositions, which recognized the jazz tradition while moving in intriguing directions. “Abundance”, her latest self-released album, is entirely comprised of Booth originals. It deploys the same outstanding rhythm section that I heard at Nocturne (bassist Patrick McDevitt and drummer Alejandro Castaño) and augments the group with three of Denver’s finest hornmen: trumpeter Greg Gisbert, alto saxophonist Joshua Quinlan and tenor 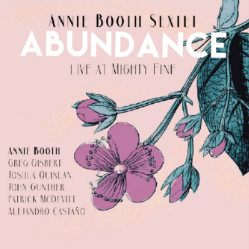 saxophonist John Gunther. “Prologue-Park Fanfare” opens with Booth’s firmly played piano ostinato joined by McDevitt on the melody line. Castaño quickly adds intensity with a driving cymbal line. But just as we expect the piece to move into solos, there is a sudden ritard. The music stops for a moment, and then restarts the driving tempo for an extended melodic statement by the horns. Another slow section ensues with a chorale melody for the ensemble, before the original tempo returns for solos by Booth and Quinland, each prefaced with a reprise of the melody, and each in a significantly different style. Despite the variety of styles, the piece feels quite unified, and that speaks volumes for Booth’s compositional talents. The next piece “Westminster Home” is essentially a blowing piece, but Booth still works in some of her compositional training: her scoring for the three horns (with Gunther now on bass clarinet) implies the delicate big band voicings of Maria Schneider without directly copying the style. I also admire Booth’s codas—she avoids the cliché of an exact theme reprise at the end of her pieces, usually finding a unique way to sum up the work such as the solo piano restatement of earlier material on “Westminster”. Even when she employs the full chorus reprise—as on “Jolly Beach”—she adds a little surprise before ending the performance, in this case, a powerful drum solo by Castaño. At Nocturne, Booth found several ways to manipulate the basic tone color of the band; she does that here too, with a dramatic alto/drum duet in the midst of the title track, and a free melodic piano fantasy at the end of the piece. The final track, “Primetime” is reminiscent of the 1960s Jazz Messengers, and it offers Gunther a spectacular solo opportunity. The band plays these challenging works to perfection, with outstanding ensemble work and memorable solos. While Annie Booth is based in Denver, she tours across the country on a regular basis. Pick up this CD for a good sample of her abundant talents, and be sure to catch her live whenever she plays in your area.

JOSH NELSON: “THE SKY REMAINS” (Origin 82741)
If “La La Land” was a salute to the superficial opulence of Los Angeles, Josh Nelson’s album “The Sky Remains” is the perfect antidote, focusing on the sometimes troubling history of the City of Angels. Each of the 10 movements is tied to a piece of the city’s legacy, ranging from nearly forgotten figures like writer Charlotta Bass and the notorious Griffith J. Griffith, who funded (and was the namesake for) Griffith Park. Nelson uses 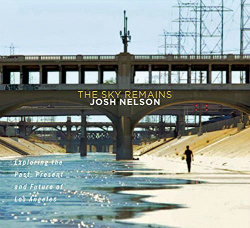 an 11-piece ensemble to create an aural equivalent to his native city, combining three horns (trumpet, clarinet and alto sax or flute) with an expanded rhythm section (piano, organ, bass, drums and percussion) and three vocalists—including Nelson—singing with and without lyrics. He creates a light, transparent ensemble sound on the opening track, “Bridges and Tunnels”, and pares it down for Kathleen Grace’s solo vocal on the title composition (I love the sound of Brian Walsh’s B-flat and bass clarinets against Grace’s floating soprano). “On the Sidewalk” uses a recurring motive in the horns as a background for brief solos by trumpeter Chris Lawrence, bassist Alex Boneham, pianist Nelson, and alto saxophonist Josh Johnson, who also composed this movement. “The Architect” builds nervous energy from two simultaneous fragmented lines, and an uneven rhythmic feel which continues through expansive solos by Nelson, Johnson, Boneham and drummer Dan Schnelle. “Ah, Los Angeles” is organized as a musical palindrome with Anthony Wilson’s second guitar solo acting as a center point. The piece seems utterly formless until vocalist Lillian Sengpiehl returns with the horns to reprise the title phrase, at which time attentive listeners will recognize the mirror images in the form. Nelson also pays tribute to two LA musicians, Russell Garcia (with his bizarre “Lost Souls of Saturn”, here transformed into a potent solo vehicle for the horns) and Elliott Smith (whose “Pitseleh” is offered as a tender memorial to the late singer-songwriter). Nelson uses the sampled sounds of a carousel and an increasingly menacing waltz melody to illustrate the abandoned “Pacific Ocean Park”, and Grace returns for the melancholy “Run”, which tells of Mack Robinson, who was overshadowed by Jesse Owens (who he ran against in the 1936 Olympics) and his brother Jackie (who broke the color barrier in baseball). The suite closes with “Stairways” which features more delicate ensemble scoring, and additional solo opportunities for Lawrence, Johnson, Nelson and Wilson. When Nelson performs this suite live, he enhances the experience with historical film footage. However, those unable to catch one of these multimedia events should not be deterred from purchasing this CD, as Nelson’s music creates vivid images on its own.