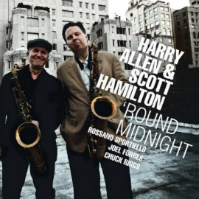 phonists Harry Allen and Scott Hamilton are among two of the most well studied jazz musicians on the planet today. They have formed their own voices while embracing the music of the 30s, 40s, and 50s. Allen says “I don’t look upon my playing from the point of view of a specific style. I love Coleman Hawkins, Sonny Rollins, John Coltrane and many others. The sound that I like is a bigger and fatter sound that guys used in the 1940s, but I don’t necessarily play in their style. I just play myself.” “Round Midnight” is the third recorded collaboration between Allen and Hamilton.  Their styles complement each other well, and one of Allen’s original compositions, “Great Scott” is based on one of Hamilton’s improvised ideas.  The date has a relaxed, comfortable vibe instead of the ferocious battles of most two-tenor albums. “My Melancholy Baby” is a medium swinging tune that finds the rhythm section of pianist Rossano Sportiello, bassist Joel Forbes, and drummer Chuck Riggs swinging hard behind and offering subtle support behind each soloist. Hamilton and Allen play lyrical melodies that flow effortlessly from their horns. The group plays with an understated perfection that can be overlooked because they make it sound so easy. There are several attractive vehicles on which the tenor men blow, including “Lover” and “Hey Lock!”  “Baubles, Bangles and Beads” is given a sensuous bossa nova treatment. It begins with a brief but beautiful introduction by the rhythm section highlighted with somber piano melodies. Allen’s solo is one of the high points in the recording. His songlike melodies are engaging. His sound at times seems one step away from Stan Getz. The entire album is expertly performed with nary a musical misstep to be found. BEN MARKLEY 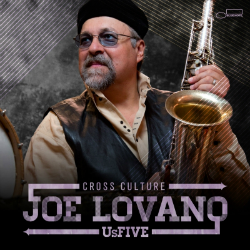 With its setup of sax, piano, bass and two drummers, Joe Lovano‘s Us Five is not structured like a typical jazz quintet. You’ll hear very few straight-four swing backgrounds from this group, but a myriad of complex beat patterns that are just as compelling. Drummers Otis Brown III and Francisco Mela work so well in tandem that in places on Lovano’s new album “Cross Culture“, they sound like one player. Most of the time though, they each have their own specific roles to play–which they then exchange between them! The original bassist of the group was Esperanza Spalding, but with her solo career moving ahead with blinding speed, Lovano has found a part-time replacement in Peter Slavov. Spalding plays on four of the eleven tracks here, and on “Golden Horn”, both basses play together to stunning effect. The underrated pianist James Weidman continues his place in the group, and for this album, Lovano invited the West African guitarist Lionel Loueke into the band. Hiring Loueke for this rhythmically-centered album was a stroke of genius on Lovano’s part. For example, on “PM” (a tribute to Paul Motian) Loueke’s unexpected entrance immediately moves the heretofore swift pulse into a free section where every member seems to play in their own tempo. Such an experiment could easily fall apart with lesser players, but the combined strength and experience of these musicians not only keeps the piece together but maintains forward momentum! Throughout the album, Lovano improvises his own unpredictable lines, sometimes working in sync with the rhythm but more often working against it. In addition to tenor sax, Lovano doubles on G mezzo soprano sax, aulochrome (twin soprano saxes attached with a single keyboard) and the Turkish pipe, the tarogato. As a group, Lovano’s ensemble communicates better than any combo on the jazz scene today. This music will continually surprise and inspire those listeners who give it all the attention it deserves. Highly recommended. THOMAS CUNNIFFE

RON MILES: “QUIVER” (Enja/Yellowbird 7728)
Having lived in Denver for the 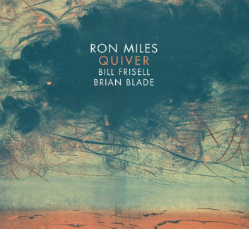 past couple of decades, I’ve had several opportunities to hear trumpeter Ron Miles in a number of different environments. Whether he’s playing classical, straight-ahead jazz or the progressive, free-flowing music on his new album, “Quiver“, his sound is always immediately recognizable and it always commands attention without huge dramatic gestures. The opening of “Mister Kevin” is played unaccompanied by Miles, and I’ve rarely heard a better recorded example of his tone–not classically pure, but absolutely beautiful in its own right and loaded with emotion. When Bill Frisell and Brian Blade enter, they don’t so much take the spotlight as much as they share it. While Frisell and Miles made the critically acclaimed duet album, “Heaven” many years ago, this is the first trio album they’ve made with Blade. You’d never tell from the results. Not only do they make you forget about the lack of a bass instrument, they also create a delicate symmetry of voices where no one gets in another’s way and everything played becomes an essential part of the total sound. Six of the nine selections were written by Miles, and two of the three others are lesser-known pieces from jazz’s Golden Era: “There Ain’t No Man Worth the Salt Of My Tears” and “Doin’ The Voom Voom” (the former sounding quite contemporary). Of the originals, I particularly like the skipping and starting style of the opener, “Bruise” and the grooving, down-home style of “Just Married”. Both of these tracks and the other standard, an extended version of “The Days of Wine and Roses”, were recorded live at Denver’s Dazzle nightclub, and to quote Monk, they truly “lift the bandstand”. Hopefully, “Quiver” will give Ron Miles an extra boost of recognition in the jazz world. THOMAS CUNNIFFE