More Important Than The Music (by Bruce Epperson) 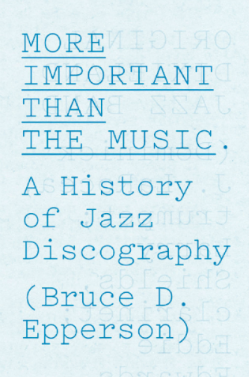 Because so much of jazz history lies within the grooves of phonograph records, discography—the science of cataloging and detailing those records—is an important part of the historical canon. In my career, I’ve created a few small-scale discographies (most recently, the Swingle Singers discography for this website) and I have great respect for those who spend their lives poring over details of recording dates and foreign issues. Up until now, the story of jazz discographers was told only in brief articles and offhand summaries, but Bruce Epperson’s new book “More Important than the Music” (University of Chicago) provides a thorough history of the discography from its beginnings as magazine sidebars to today’s online databases.

For those of us weaned on the works of Brian Rust and Jorgen Grunnet Jepsen, it’s a little hard to conceive of discographies not based on the hierarchy of matrix numbers, record numbers and recording sessions, but Epperson shows how early discographers like R.D. Darrell, Hilton Schleman, Charles Delaunay and Orin Blackstone used their own methods to organize their works, and he discusses the strengths and weaknesses of each approach. Standard discography style was eventually codified by Rust, Delaunay, and the “Jazz Directory” team of Albert McCarthy, Dave Carey and Ralph Venables, but then a new division arose about whether uncredited musicians on a recording should be identified through close listening or through interviews with other musicians. When LPs and 45s replaced the 78, the multitude of reissues made the discographer’s work overwhelming, and several discographers gave up trying to list every issue of every side. Those that did try—notably the “Jazz Directory” team—rarely completed their discographies.

The completion of the Rust and Jepsen works in 1961 and 1970 respectively, brought the inevitable call for corrections and expansions. In addition to revisions of his main opus, “Jazz Records A-Z”, Rust created additional volumes on dance bands and entertainers to supplement his work. Jepsen retired after creating his discography of post-war jazz recordings (which Epperson refers to as “Jazz Records, 1942-196X” because the cutoff dates changed throughout its publication history), and a team led by Erik Raben led an effort to update the work through 1980. Before Jepsen had completed his original tome, the Belgian discographer Walter Bruyninckx was already trying to supplant both Rust and Jepsen with his loose-leaf work “50 Years of Recorded Jazz”. Bruyninckx’ work was full of errors and hard to collate, but some of the same errors reappeared when Tom Lord published the initial print editions of his “Jazz Discography” in the early 1990s.

In addition to being a superb researcher, Epperson is also an engaging storyteller and he makes these historic figures come alive through their own words and actions. There are excerpts from angry letters written by the young Rust, a wild story about Venables, who planted deliberately false information to discredit the editor of a competing publication, and the retorts of Bruyninckx and Lord to criticism of their works. There is also a detailed discussion of the split between Delaunay and his long-time friend Hugues Panassié (which went much deeper than Panassié’s dislike of modern jazz). It is when Epperson breaks away from the main story that the book slows to a crawl. In the first chapter, he gets mired in the web of nomenclature, and in the next chapter, the publishing history of Delaunay’s “Hot Discographie” is told through a dense and confusing discussion. Epperson also takes a two-chapter detour from his story to discuss label discographies, solographies and listening guides. As there is little narrative thread to connect the authors of these works, these chapters are sometimes difficult to follow. The listening guide section could have been left out of this history, but since Epperson includes them, I must take him to task for excluding one of my favorites, Len Lyons’ “101 Best Jazz Albums”, which helped me build and develop my own record collection.

Epperson also discusses the issue of plagiarism, which turns up repeatedly amongst discographers. This is a particularly thorny issue because so much discographical information is basically raw data. It seems inevitable that later discographies would borrow from their predecessors, but no one seems to agree on just how much new and revised material justifies the publication of a new discography. Apparently, Lord’s inclusion of CDs does not meet Epperson’s criteria, as Epperson stops just short of calling Lord a thief! Near the end of the book, Epperson meekly admits that the plagiarism charges against Lord have faded, and that Lord makes daily corrections to his database. Yet Epperson never truly grasps the importance of Lord’s primary contribution: the creation of a searchable online discography. The old multi-volume discographies were difficult to navigate without both tune and artist indexes. Lord eliminated the problem with a simple search box. For example, while in college I searched Jepsen for hours to find the personnel and recording date for a record called “El Salon de Gutbucket”. The 10” LP I had said it was by Coleman Hawkins, but Hawkins wasn’t the leader on the original 78, so the title was not listed in Jepsen’s Hawkins chapter. Lord’s online database made it easy: enter the song title into the tune search field and up comes the listing—under Charlie Shavers’ name. Lord has revolutionized jazz discography by taking it away from ink and paper, and instead of emphasizing that point,  Epperson quibbles about the subscription cost and the supposed limitations of Lord’s database.

It appears that the book was not written in sequence, and the editor apparently didn’t read it from front to back either. Several extended quotes reappear in multiple chapters, and in at least one case, the same information turns up in adjoining paragraphs. There are also two appearances of a parenthetical note stating that the Tom Lord who wrote the Clarence Williams is not the same as the one who compiled “The Jazz Discography”. These errors are magnified within a book about the detail-oriented science of discography. Thankfully, the story of discography is still in progress, so as in the case of Rust, Delaunay, Jepsen, Bruyninckx, Lord and the rest, this book will have to be revised, corrected and expanded.