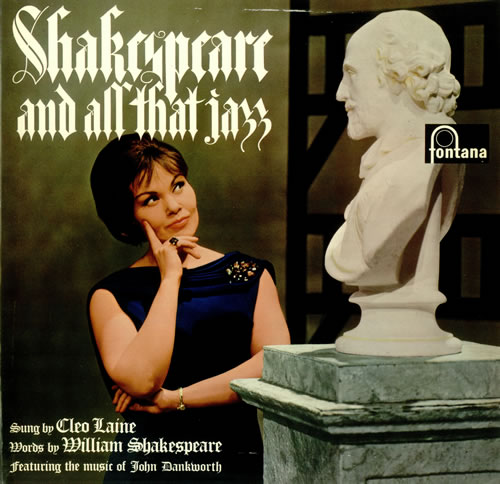 Cleo Laine is a Renaissance woman, both in the figurative and literal definitions. Her career has encompassed a wide range of mediums and styles. She performs Bach inventions alongside the funkiest 12-bar blues, and the highlights of her career include a brilliant turn as the Witch in Stephen Sondheim’s musical “Into the Woods” and a classic recording of Schoenberg’s “Pierrot Lunaire”. Laine’s first official recording was of a setting of a Shakespeare text, and she recorded four Shakespeare settings in 1959. However, her 1964 LP “Shakespeare and All That Jazz” was an exceptional album-length tribute to the Bard, and it still stands as one of her finest recordings. In the previous year, Laine’s husband and musical director, John Dankworth, had created a big band album called “What the Dickens” which featured some of Britain’s finest jazz musicians in musical portrayals of Charles Dickens’ most famous characters. For “Shakespeare and All That Jazz”, Dankworth lead a small ensemble, was a principal soloist on alto sax and clarinet, and composed and arranged several of the tracks (On both the Dickens and Shakespeare LPs, another featured soloist is trumpeter Kenny Wheeler). The only CD reissue is a Japanese version on EmArcy; the original Fontana is quite rare, but there are LP reissues on Affinity and Philips (the last re-titled “This is…Cleo Laine”) that are easier to find. Both reissues are of the preferred stereo edition.

The texts cover Shakespeare’s sonnets, comedies (“Midsummer Night’s Dream”, “As You Like It”, “Twelfth Night”,  “Love’s Labors Lost” and “Much Ado About Nothing”) and tragedies (“Macbeth” and “Cymbeline”). Four of the musical settings are the same Arthur Young arrangements Laine recorded in 1959, two others are adaptations of

movements from the Duke Ellington/Billy Strayhorn suite, “Such Sweet Thunder”, and the remainder are Dankworth originals. Except for the side closers, “Dunsinane Blues” (an adaptation from “Macbeth” possibly inspired by a Leonard Bernstein example in his lecture “What is Jazz?”) and “The Compleat Works” (a breezy catalogue of Shakespeare’s play titles), all of the works include Shakespeare’s texts as he wrote them. These texts aren’t necessarily easy to sing, but you’d never tell from Laine’s effortless performances. She takes these tongue-twisting lyrics and phrases them in ways that make them fit right into their modern jazz settings. The Ellington/Strayhorn pieces were set to sonnet forms, and “Take All My Loves” (originally titled “Sonnet for Hank Cinq”) has an extremely wide-ranging melody that Laine sings as if it were a simple ditty. Dankworth creates an atmospheric background with clarinets and harp for the other Ellington/Strayhorn piece, “My Love is as a Fever” (“Sonnet for Caesar”), and Laine’s legato performance is especially effective. On “Duet of Sonnets” (sonnets 23 and 24), and “Witches Fair and Foul” (combining Titania from “Midsummer” and the three witches from “Macbeth”), Laine and Dankworth use the stereo soundscape and creative overdubbing to have Laine singing two and three different melodic lines at once. She makes a dramatic change to her vocal timbre in portraying the “Macbeth” witches, so much 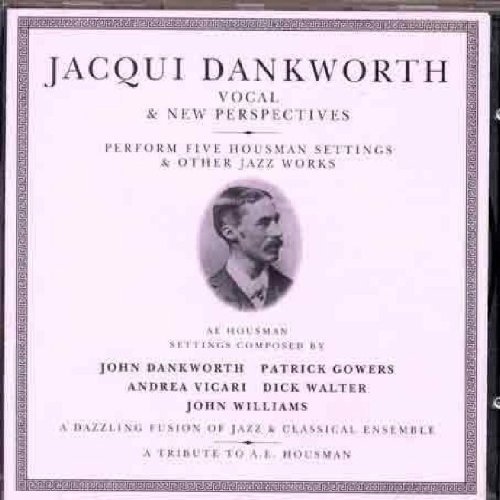 so that you might not recognize her at first hearing.

John Dankworth passed away in February 2011, but Laine has continued to perform on occasion, including a previously scheduled concert that take took place hours after Dankworth’s death. The couple’s two grown children, Alec and Jacqui, are established jazz performers in their own right, Alec playing bass with Dave Brubeck for several years, and Jacqui one of the top vocalists in England. Laine’s website lists an upcoming performance of “What the Dickens” with Alec conducting, and Jacqui’s latest CD, “It Happens Quietly” includes her father’s final recordings. Interestingly, Jacqui’s first recordings were a set of A.E. Housman settings with individual movements composed by her father and several other top British composers. Like the Shakespeare settings recorded by her mother, the Housman settings offer a challenging showcase for the vocalist, requiring extraordinary control in all ranges of the voice and a wide variety of vocal techniques (My track review of the most elaborate of these settings, Patrick Gowers’ “Terence, This Is Stupid Stuff”, can be read here). No one but Cleo herself will determine how much longer she performs in public, but she can be proud of a great recorded legacy for herself and a strong ongoing legacy with her talented offspring.