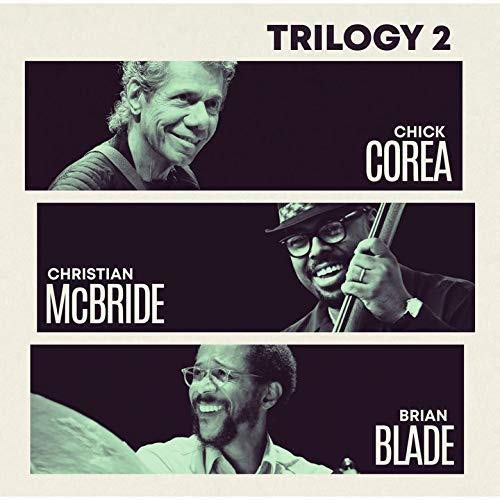 Perhaps the university setting was an inspiration. Or maybe, the still vital 78-year-old jazz master Chick Corea wanted to demonstrate how his innovations enrich standard jazz repertoire. Whatever the reason, Corea’s October 9 concert at Macky Auditorium on the University of Colorado campus was a virtual master class in reinterpreting the works of great jazz pianists. While Corea’s bandmates Christian McBride and Brian Blade are both about half 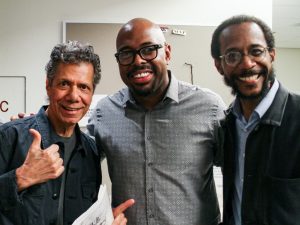 Corea’s age, they are already major jazz icons with a strong sense of tradition. They are a powerhouse trio, able to play and enhance any style of music. Their Boulder concert included music by Corea, Duke Ellington, Thelonious Monk and—suprisingly—Domenico Scarlatti. In each case, the trio interpreted the works in ways which respected the originals but also brought them into the present tense. For example, “Alice in Wonderland”, a piece closely associated with Bill Evans, showed how the trio updated the 1961 Village Vanguard recording which featured Evans, Scott LaFaro and Paul Motian. As on that recording, the ground beat could be felt in Corea’s version but it was not implicitly stated by any member of the trio. Like the Evans trio, the Corea/McBride/Blade triumvirate aimed for a three-way musical dialogue. However, the new version was much more sophisticated than the Evans record: Blade created rhythmic motives which superimposed 5/8 and 7/8 meters over the basic 4/4 pulse while McBride moved across the different registers of his bass, intersecting  melodic lines with Corea’s fluid improvisation. Corea, who opened many of the tunes with extended unaccompanied introductions, elicited a gorgeous sound from the piano, combining a gentle touch with a brilliant singing tone. The trio’s version of Ellington’s “In a Sentimental Mood” kept a tight rein on the beat, with the three men accenting several phrases of the melody as one. McBride brought out the bow for his solo, which alternated original creations and Ellington’s melody. The Scarlatti was couched in a medley which opened with a highly abstract free improvisation (including Corea’s plucking of the piano strings) and closed with Corea’s original “Spanish Song”. The baroque work was not immune from improvisation, and all three musicians found interesting material within the 300-year-old work.

The members of this trio have a special affinity for Monk, and three of the concert’s ten pieces were composed by the High Priest of Modern Music. Monk never improvised on his tender original, “Crepuscule with Nellie”, probably because the piece (named for his wife) was too personal for him, but Corea, McBride and Blade took an unusual but respectful approach to the work. Blade opened with an understated and thoughtful drum solo, using mallets, toms and cymbals to expressive effect. The performance unfolded gradually before segueing into a Latin groove for the thorny and challenging “Work”. Corea dug into the song with a witty and incisive solo as McBride walked his bass with gusto. After closing the official program with another Corea original, “Fingerprints” (which, like its inspiration, Wayne Shorter’s “Footprints”, is an abstract blues) the encore was another blues, “Blue Monk”. In a way, this might have been a better opener than closer, for the trio displayed its proficiency in playing classic piano trio style. There was a good connection between the opening and closing of the concert, as Corea used both opportunities to throw out melodic ideas for the audience to sing back (Corea’s introductory remarks were that “we’re going to tune up, and then we’ll tune you up”. I don’t think we knew what he meant for a few minutes).

Although Corea, McBride and Blade waved to the audience from the stage—and Corea even took a selfie of the band and the audience—they did not come to the lobby to greet the sold-out audience or sign copies of their newly-released double CD, “Trilogy 2” (Concord  Jazz 183). Those who took a copy 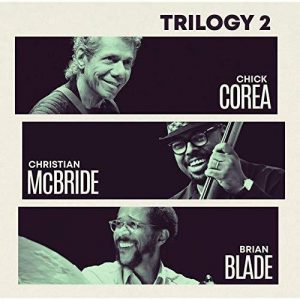 of the album home undoubtedly discovered a different concert experience on disc than what they witnessed at Macky. Only three songs from the concert—“Crepuscle”, “Work” and “500 Miles High”—appear on the album, which was taken from recordings from the trio’s previous tour. The pedagogical bent seems absent from the recording, but the music is still quite invigorating. The set opens with an intensely swinging version of “How Deep is the Ocean?” which spotlights the trio’s amazing chemistry. Throughout this track—and the whole album–each musician seems to know exactly where the others are going, and each makes statements on his instrument to prove the point.  As in Boulder, “500 Miles High” opened with a ruminative piano introduction before moving into a light Latin treatment. With Blade’s insistent drumming, McBride’s propulsive bass and Corea’s mercurial improvisation, the piece eventually grew like a bubbling volcano. “Crepuscule” is presented without the opening drum solo and with a bass line adapted from the original recordings. Still, Blade’s loose conception of the ground beat, and the improvised solos separate this version from the original and the subsequent remakes. The CD’s version of “Work” is explosive with great interplay between all three musicians, and powerful interjections from Blade’s drums. This is what Monk called “lifting the bandstand”! Corea plays the ballad “But Beautiful” in what sounds like a higher key than usual, but the different tonality helps to keep the listener engaged within this intriguing rendition. I suspect that some of the audience members at Macky expected to hear either “La Fiesta” or “Spain” on the program. Neither piece was played in Boulder, but the former appears on the album as the disc 1 closer. The composition’s multiple strains leads the players into fascinating directions, with the listeners constantly wondering what lies around the next musical corner.

Steve Swallow’s “Eiderdown” is one of the most iconic jazz compositions of the 1960s, so I was a little surprised to learn that none of the trio members had recorded it before. In their capable hands, the song ebbs and flows with a deeply felt undercurrent. Miles Davis’ “All Blues” gets a very energetic performance, but I find it hard to get too excited about another version of this old warhorse. Corea, McBride and Blade find a few interesting ideas in this 11 ½ minute ride, but I’m willing to bet that there were better live tracks left in the vault. Similarly, the straight-eighth feel of Stevie Wonder’s “Pastime Paradise” restricts the free-flowing rhythms of this trio. Yet, on Corea’s groundbreaking work “Now He Sings, Now He Sobs”, the group plays straight eighth notes with feeling and soul. The rhythm alternates between pulsation and swing, and despite its changes in time signatures, it feels like an organic whole. Joe Henderson’s “Serenity” gets the relaxed treatment its title merits, although Blade’s commentary on sticks and brushes keep the piece from lulling into complacency. The closing track, “Lotus Blossom” is not the Billy Strayhorn piece, but Kenny Dorham’s “Asiatic Raes” with an alternate title. Blade’s hand drumming, Corea’s exploratory improvisation and McBride’s repeated vamp help to set an exotic mood before the setting shifts into up-tempo swing. Like “Blue Monk” in Boulder, “Lotus Blossom” shows this trio’s ultimate mastery of the post-bop piano trio style. In fact (and to fully bring us back to where we started), this track could be a textbook example of the re-imagined trio style.

As a member of the audience at the Boulder pre-concert talk, I commented that Chick Corea’s stylistic range was so wide, it was impossible to predict what kind of music he would play in concert. With the addition of Christian McBride and Brian Blade, the stylistic possibilities were expanded twice over. Sure enough, the Boulder audience got a very specific performance, and those who purchase “Trilogy 2” will get an equally compelling—but substantially different—musical experience.

As befits a trio of creative geniuses.