The Boswell Legacy (by Kyla Titus) 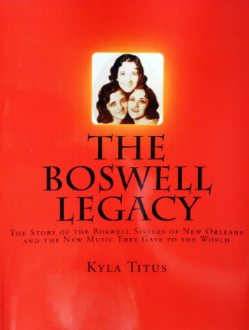 Nearly 80 years after making their last recordings as a trio, the Boswell Sisters are enjoying a resurgence in popularity. All three of the sisters—Connie, Martha and Vet—passed away many years ago, but in October 2014, several vocal groups from around the world gathered in the Boswell’s adopted hometown of New Orleans to celebrate and recreate the trio’s unique style. Recordings by some of these tribute groups were recently collected on a CD called “The Boswell Sisters: Their Music Goes Round and Round”. One of the groups at the convention but not represented on the CD, Duchess—featuring three vocalists previously reviewed on these pages, Amy Cervini, Hilary Gardner and Melissa Stylianou—plan to include the Boswell’s “good luck song”, “Heebie Jeebies” on their forthcoming release. Through overdubbing, Bette Midler covered all three vocal parts on “It’s the Girl”, the title track of her latest CD. In addition, a traveling exhibit of Boswell family artifacts was on display at the New Orleans gathering, a documentary on the Boswells called “Close Harmony” is scheduled to air on PBS in 2015, and Vet’s granddaughter, Kyla Titus has self-published a new book “The Boswell Legacy” which clears up several misconceptions about the Boswell’s lives and careers.

Much of the confusion regarding the Boswell Sisters can be traced to “the Foore Code”, a strict set of family bylaws which had been followed since before the Civil War. Basically, the code stated that family business stayed within the confines of the family, that everyone was expected to retain a united, loyal front regarding other family members, avoid saying unkind words about anyone else, and work hard for what they desired. Most importantly the code said if an unacceptable event occurs, close ranks, ignore facts or, if necessary, alter them. The Foore Code is a recurring metaphor in Titus’ book, and as the narrative comes to a close, she credits an infraction of the code as a factor in the breakup of the Boswell trio. Still, it is by breaking through the deceptions encouraged by the code that Titus deciphers the mysteries surrounding the family. For example, Connie’s legs were paralyzed due to a childhood incident. For years, it was reported that she was involved in an accident with a New Orleans streetcar. However, Titus recounts an account from the Boswell’s mother of an accident in Birmingham, where three-year-old Connie was thrown from a child’s pieced-together wagon. Connie was stricken with polio about the same time, and in a footnote, Titus claims both the polio and a later accident, from when Connie was 22, were the reasons Connie never walked again. Regardless of the cause, Connie’s paralysis made her the prime concern of her mother, who nearly ignored her newborn daughter, Vet, to care for Connie. Martha, the eldest daughter, had to take over some of the motherly duties, despite being only a teenager herself.

The Boswell family moved to New Orleans, where Connie, Martha, Vet and their older brother Clydie received instruction in classical music. Clydie was a prodigy on violin, but he died during the 1918 outbreak of Spanish influenza. The three sisters, who all played instruments as well as sang, became the focal point of the family. After initial successes in New Orleans and encounters with several local musicians (including the doomed trumpeter Emmet Hardy), the Boswell Sisters traveled to Chicago for an engagement at the Englewood Theatre. In reality, the “invitation” they received was only for an audition. They were finally accepted by a booking agent, and the sisters slowly built their act up to professional standards. After a miserable tour on the vaudeville circuit, the Boswells were encouraged to try their luck in California. When they arrived in San Francisco, the unescorted Boswells sisters naively checked into a brothel for their first night’s lodgings. The desk clerk, Harry Leedy, befriended them and eventually became Connie’s lover and the trio’s manager. However, there was another slow year for the sisters (and considerable concern from their parents) before Leedy took charge of the Boswell Sisters’ careers. Despite his inexperience in show business, the Boswells became major stars in radio, films and recordings.

The Boswell Sisters were true innovators who introduced many unique style elements into their approximately 100 recordings. To start, Connie, Martha and Vet could phrase together like few other trios, anticipating or delaying motives and incorporating subtle inflections in the same manner as a solo singer. While Titus and many other authors have attributed this to the sisters’ strong telepathy, there is little doubt that they planned and drilled these variations in rehearsal. Their arrangements featured surprising and frequent tempo changes, minor-key thematic transformations, uncanny imitations of instruments, thrilling riff patterns, and vocal tricks like “gulling” (a back of the throat sound later incorporated in Spike Jones’ recordings, but performed in three-part harmony by the Boswells) and “gibberish” (a Boswell family language resembling pig Latin). On some arrangements, the Boswells would completely jettison the song’s harmony and sing the lyrics over a 12-bar blues!

While the trio amassed a large fan base, Leedy decided to build up Connie’s solo career. Concerned for the welfare of all three daughters, the Boswell parents were instantly skeptical of Leedy’s intentions. However, they eventually acquiesced to Connie’s wishes. Titus posits that Leedy’s increasing attention to Connie’s solo career, and relative neglect of the trio was the main cause for the trio’s demise in 1936. However, the musical evidence indicates that the trio may have just run out its artistic course. Most of the innovations listed above had already appeared on Boswell recordings by the end of 1933. While the trio made several more fine recordings in the next two years—including an arrangement of “Dinah” which incorporated many of their achievements—they seemed to just plug in the old innovations rather than create new ones. With the exception of the remarkable “Let Yourself Go”, the group’s final recordings for Decca are disturbingly pedestrian, missing many of the innovations that had made the Boswell’s music so exciting just a few years earlier. All three of the sisters were married by that time, but Martha and Vet were quite willing to continue touring and recording with the trio (so much so that Vet kept her wedding a secret for over a year!). With the big band era just getting started, it’s rather surprising that Leedy didn’t try to team up the Boswell Sisters with an up-and-coming orchestra. Instead, Leedy decided that Connie should focus on her solo career and Connie—now Leedy’s wife—apparently agreed.

For all the benefits of Titus’ biographical research, the book suffers from an utter lack of musical analysis. The Boswell recordings—truly the centerpiece of their legacy— are basically ignored in favor of radio and film performances (most of which are unavailable at present). In the entire book, there is only one quote which describes a Boswell arrangement from beginning to end, and musicologist James Van Schilling accomplishes it without using musical jargon. Why wasn’t Van Schilling invited to include a comprehensive look at the Boswells’ music? (After all, he was the editor of the book!)  And if he wasn’t available, why not Will Friedwald, who described the complex arrangement of “Shout, Sister, Shout” in his book “Jazz Singing”, or Cynthia Lucas, who created a superb online audio essay on the elements of the Boswell style? Without a discussion of the Boswell Sisters’ music, Titus’ book is only useful to long-standing fans of the trio, and it will do little to encourage newcomers to explore the Boswell recordings. That is a missed opportunity—one that is especially tragic in light of the renewed interest in the Boswell Sisters.