If you are claustrophobic, the Green Mill might not be your club. Dave Jemilo, the owner of this former speakeasy on the North Side of Chicago, is not content to simply fill up the booths, tables and chairs; there is an open section between the bar and the tables, and more often than not, that area becomes a standing room only area. I’ve visited the Mill twice in the past few years, and each time, I’ve landed the last seat: a barstool placed in front of the jukebox. When the room is packed, it is nearly impossible to avoid stepping on feet and rubbing against your neighbor. The waitresses do a commendable job of navigating through the maze of humanity without spilling drinks. Of course, the Mill is one of Chicago’s 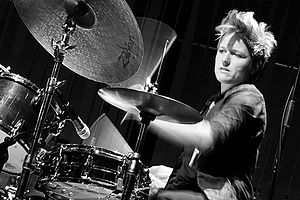 premiere jazz rooms, and Jemilo consistently brings in the best artists. One of the Mill’s regulars told me that it’s not always clear that the audience knows the featured groups before heading to the bar, but the audience on Friday night, October 20, was very happy to see Allison Miller’s Boom Tic Boom. A slightly different version of this group played an acclaimed set at the Chicago Jazz Festival seven weeks before, and the crowd at the Green Mill was anxious to hear more.

Boom Tic Boom has used a rotating personnel over the past few years, but its latest recording features a sextet with Kirk Knuffke (cornet), Ben Goldberg (clarinets), Jenny Scheinman (violin), Myra Melford (piano), Todd Sickafoose (bass) and Miller (drums). For the Green Mill performance, Jeff Lederer, Carmen Staaf and Tony Scherr replaced Goldberg, Medford, and Sickafoose, and each brought their unique personalities to the music: Lederer with his wild humor and vivid imagination, Staaf with her rich harmonic vocabulary and supreme touch, and Scheer with his glorious tone and solid timekeeping. The group was in the midst of a tour, and they were already experimenting with the music. Miller’s originals let the improvisers determine the background for their solos, and the members of the group take full advantage, as on “High T”, where Knuffke played over straight-ahead swing, Lederer on a boogaloo, and Miller in free time. The solos on “Fluster” took a cue from a transition in Miller’s composition by overlapping the improvised solos. The tune also offered a brilliant introduction to the leader as 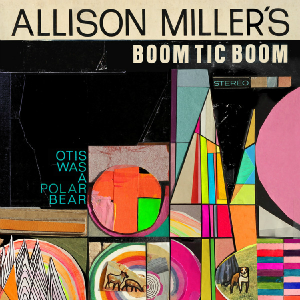 she flawlessly shifted from klezmer through funk to Latin beats in the opening bars. “Slow Jam” featured the newest members of the group in a radically transformed arrangement. Scheer opened with an extended unaccompanied solo, Lederer played a beautiful invention over Miller’s cushion of brushes, and Staaf engaged Lederer into a lively dialogue as she provided supremely melodic answers to his abstract lines.

Elsewhere, the sustaining members of the group were equally impressive. I’ve admired Knuffke for several years, especially his ability to make the most angular lines sound melodic. Certainly, his choice of instrument and its dark tone help, but Knuffke has undoubtedly concentrated a great deal of time into creating this unique blend of progressive and traditional jazz improvisation. I’ve wanted to hear Scheinman live for years. Her creative spirit was quite evident throughout the performance as she embraced several genres both in and out of the traditional violin repertoire. On the opening piece, she played figures that seemed more idiomatic to a heavy metal guitarist, but she made them fit into the context of Miller’s composition. Rather than focusing her eyes on the fretboard of her violin, she held the instrument off to the side while staring out into the room. She was still deeply connected into the music, accentuating each half-step pitch variation with a slight bend of the knees. On other pieces, she brought out an “octave violin” which uses a different set of strings to create sounds an octave lower than the instrument’s traditional range. The low-pitched rustic sounds of her solos brought dramatic tension to the music. Scheinman has been part of Boom Tic Boom for several years, and she carries an unusual role: sometimes she plays with the front line, but she also plays contrapuntal parts to the horns as required by Miller’s arrangements.

To date, Boom Tic Boom has recorded three CDs, all of which come highly recommended. However, this group thrives on live performances. Miller told me that the group’s renditions have been different every night, and I believe it. If your musical tastes run to uncompromising progressive jazz, make every effort to hear Boom Tic Boom live. They are living proponents of “the sound of surprise”.