Sonny Rollins can take a simple melodic phrase and twist it so many ways that it sounds like a musical pretzel. And then, as if pulling a string, he effortlessly comes back to the theme, showing that the musical pretzel was no more than a slipknot. He does this in a performance of  “I Can’t 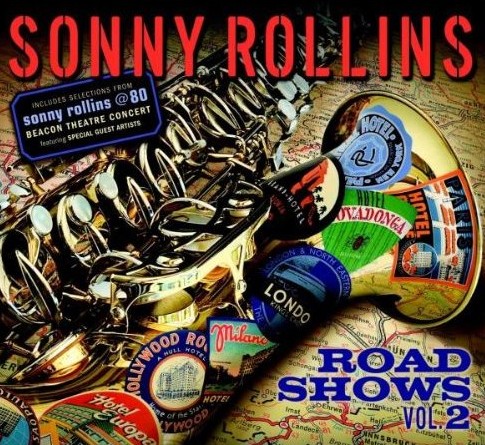 Get Started” that was recorded at his 80th birthday concert at Beacon Hall in New York and is included on his new CD, “Road Shows (Vol. 2)“. Rollins is still a thematic improviser at his core, and the beguiling way that uses melody to create convoluted improvised lines is one of the reasons why his music is simultaneously accessible and complex.

Rollins is notoriously self-critical and he has said that he doesn’t like to listen to his own recordings. The “Road Shows” albums were Rollins’ method of coping with a large collection of unissued live recordings. The first volume collected excerpts from 17 years of concerts, but the current volume takes all of its contents from three performances recorded within a month of each other. The Beacon Hall concert represents the lion’s share of this music, and those 4 tracks occupy the central part of the disc. But Rollins is also the producer of the CD and he makes an interesting set of choices in programming the tracks. He starts with a performance of “They Say It’s Wonderful” from a Sapporo concert on October 1, 2010. In a way, the song acts like an overture, offering little snippets of the joys to come. Rollins doesn’t take a true solo on this track; instead, he trades fours with drummer Kobie Watkins, then after Watkins takes a full solo, something that starts like a Rollins solo morphs into a few more exchanges with the drums before becoming a chase sequence with guitarist Russell Malone. The applause from Sapporo cross-fades to Beacon Hall (recorded three weeks earlier) and Rollins’ announcement of guest guitarist Jim Hall. Hall plays a lovely version of Duke Ellington’s “In A Sentimental Mood”, but Rollins doesn’t play a note on it. With the timing of an opera star, Rollins has effectively delayed his entrance until the third track and on that track, he is in prime form.

The track in question is “Sonnymoon For Two” and due to the surprise appearance of Ornette Coleman, I suspect that this performance will be discussed for years to come. It is a fascinating recording, even if it’s not entirely successful. It opens as a trio performance with Rollins, bassist Christian McBride and drummer Roy Haynes. Of course, Rollins knew that Coleman was waiting in the wings, but instead of verbally announcing the free jazz giant, he introduces Coleman through his improvisation. He plays an intriguing mix of ideas, some inside the changes and some out, and some crossing against the standard blues phrasing and others lying in the pocket. He never loses his own identity in the process, but he manages to offer a preview of what’s to come. Rollins announces to the audience that “a special guest” is about to join him onstage, but while they wait for Coleman to appear, Rollins starts another solo that is more in line with his own style. The audience erupts when Coleman steps onstage, and from his opening phrase, it is abundantly clear that Coleman has no intention of playing on blues changes or blues form. And this is when things get interesting. Once McBride switches from walking the blues to a free-bop concept, there is an ongoing question: Will the performance stay free or will it go back to the blues? When Rollins returns for his third solo, McBride tries to move back to the changes, but Rollins straddles the fence, and just when it sounds like they’re going back to the blues, Coleman re-enters and it’s back to free. Rollins gets one more solo and here he seems more committed to soloing in the free style. And while Rollins quotes his melody and other songs throughout this solo, Coleman’s solo spots only offered hints of songs that were never developed beyond a few notes. And to bring it all to a close, it just takes a few notes of the melody from Rollins’ horn for the rhythm section to move out of free-bop and back into the blues.

After this summit meeting, one might expect the rest of the disc to be a letdown, but Rollins has shuffled the order of the Beacon Hall concert to place his tracks with Roy Hargrove next. In a way, these tracks are even more satisfying than the encounter with Coleman. The aforementioned “I Can’t Get Started” offers brilliant and contrasting ballad concepts from the two horn men, and their version of Billy Strayhorn’s “Raincheck” shows that, despite their age differences, these two men could happily converse in the language of bebop. There’s a brilliant set of exchanges on this track where Rollins and Hargrove seem to revel in each other’s company. Rollins’ lines overflow with joy and near the end, Rollins and Hargrove seem to anticipate each other’s ideas. While there is still a 3-minute version of “St. Thomas” from Tokyo remaining, Rollins the producer has found the emotional high point of the disc.

It can’t be easy for Rollins to live up to his reputation when he has terms like “the greatest improviser on the planet” flung at him all the time. He has kept his perspective though, and while he still says that he has yet to make a record he likes, we must hope that he’s getting closer to his standards. Those of us who listen are awfully glad he keeps trying.