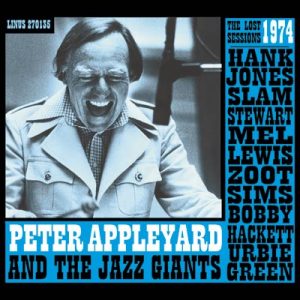 In the 1970s, Benny Goodman was still a big enough name to headline national television specials and draw sell-out concert audiences. While Goodman was hardly a trendsetter in this period, his playing was excellent both technically and emotionally, and he always featured superb musicians in his bands. For a concert at Carnegie Hall in September 1974, Goodman assembled an all-star group featuring cornetist Bobby Hackett, trombonist Urbie Green, tenor saxophonist Zoot Sims, vibraphonist Peter Appleyard, pianist Hank Jones, bassist Slam Stewart and drummer Grady Tate. Appleyard was headlining a gig in Toronto the following night, and to his surprise, all of the musicians save Tate were available. With Mel Lewis subbing for Tate, the band played the Toronto concert and according to Appleyard, the group “tore it up that night.” While the concert was not recorded, Appleyard brought the group into RCA’s Toronto studios after the performance to record an album for future sale and release. 38 years later, we now have that music for the first time in “The Lost 1974 Sessions”.

In a three-hour session, the band recorded 46½ minutes of high-quality music—enough for a very generous LP. The album includes an extended tribute to the recently passed Duke Ellington, three pieces for the ensemble, and several individual features for the soloists. Two of the ensemble pieces are associated with Goodman: “A Smo-o-o-oth One”, starts out well but loses energy as it goes, but “After You’ve Gone” gets a spirited performance from beginning to end. On the latter, Sims, Appleyard, Green, Jones and Stewart dig into the tight groove, but Hackett stretches his ideas out as if in long meter without compromising the swing. The best ensemble piece is “Tangerine” with a fine unaccompanied dual improvisation by Sims and Appleyard, an excellent solo by Green, and fiery swing from Jones, Stewart and Lewis. On the solo features, Stewart does his trademark singing-and-bowing on a light-hearted “Indiana”, Sims excels on a medium-swing version of “You Go To My Head”, and Jones plays a lovely solo version of “Dancing On The Ceiling”. Listeners might be surprised to hear Hackett play the sophisticated ballad, “You Don’t Know What Love Is”, but the cornetist had an advanced harmonic sense (he doubled on guitar) and while he doesn’t stretch the harmonies on this ballad, his interpretation is nuanced and heartbreaking. But the best feature is Green’s version of “But Beautiful”. In superb form throughout the session, Green outdoes himself here with a solo that displays his flawless technique in all ranges of the horn, and an adventurous rhythmic sense that creates unique subdivisions of the basic pulse.

However, for all the wonderful music contained on the disc, it is hard to recommend it because of its poor production values. The jacket has misspelled tune titles and Jones’ solo version of “Don’t Blame Me” goes completely uncredited. The complete takes play in the original session order which means that the album starts and ends with ballads (certainly not the original intention). Following the master takes is a long track of outtakes and studio chatter, which suffers from sloppy editing and unintentional duplications. The master take of “You Don’t Know What Love Is” reappears in toto, and there’s over a minute of blank space at the end of the track. Further, Appleyard added the recording slates (take numbers announced by the engineer) before each completed track, and then duplicated them in the outtake track. In 23 minutes of outtakes, there’s only one complete alternate take and a few breakdowns (all in an attempt to fix the flawed ending of “Tangerine”) and the rest is ultimately trivial. To make this album listenable, it is almost necessary for the consumer to re-edit and re-burn the disc to remove the duplications and the minute of blank space. That should really be the job of the producers, and they would do well to issue a corrected version of this disc that will do its timeless music justice.