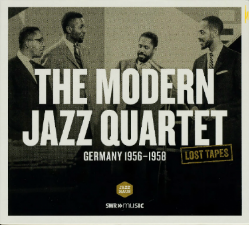 Despite the formal compositions of musical director John Lewis, and the concert wardrobe of tuxes or tailored suits, the Modern Jazz Quartet was never as stuffy as its critics maintained. Indeed, their music constantly evolved and changed. When I first heard the MJQ live, I sat on the edge of my seat, leaning forward to catch every note. Even on “Bags’ Groove” (which they had doubtlessly played thousands of times by then), they found new ways to vary their accompaniments and solos. The MJQ is the subject of SWR Music’s latest disc of “Lost Tapes”. Taken on its own, it represents further examples of the MJQ playing at its usual high level, but its historical importance becomes quite apparent when compared to other recordings of the period. The new disc collects recordings made by the MJQ for German radio and TV between 1956 and 1958. The MJQ recorded prodigiously during this time—both live and in the studio—and those recordings identify subtle changes in the arrangements and performances.

For example, the first track on the new disc, “Ralph’s New Blues” starts with Milt Jackson’s melody played in canon by piano, vibes and bass. The piece debuted at a recording session for Prestige on July 2, 1955 (which was also Connie Kay’s first recording session with the group). On that version, Kay played a eighth-note triplet figure with brushes on snare behind the canon. By the time they performed at the 1956 Newport Jazz Festival, Kay had moved the triplet figure to a bell tree. Still the eighth-note triplet sounded a little too much like rock-and-roll. On the German recording made just three months after Newport, Kay had found the perfect solution: he changed the figure from eighth-note triplets to quarter-note triplets. The three-against-two feel made the melody seem suspended in time, instead of tied to the ground beat. On the Prestige recording, Lewis accompanied Jackson’s solo with a fascinating linear improvisation that worked endless variations on an old big band riff. At Newport, Jackson’s solo had been shortened considerably, and Lewis played block chords behind him. But Lewis takes a different approach on the German recording. Playing in and above the register of the vibraphone, he creates a contrapuntal line that both exists on its own and answers Jackson’s ongoing solo. Then when it’s time for his own solo, Lewis goes back to the big band riff variations while Percy Heath and Kay cook strongly beneath him.

It sounds to me that the group was experimenting with balances on “England’s Carol” (which the disc refers to by its source material “God Rest Ye Merry Gentlemen”). Jackson seems off-mike on some of the ensemble passages (just how did he do that?) and Kay is barely audible behind Lewis’ solo but brings his volume up at the precise moment of the ensemble re-entry. The earlier recordings from Newport and Music Inn reflect some of these same changes, but the German recording shows a greater finesse in the overall effect. “I’ll Remember April” was a blowing vehicle also recorded at the July 1955 Prestige session. On that recording’s chase choruses Lewis sometimes played behind Jackson’s 4-bar exchanges and sometimes didn’t. Perhaps Lewis wasn’t sure what worked best, since he played and comped throughout the exchanges at Newport, but not at all in Germany or on the Chicago Opera House recording from 1957. The German version has tremendous momentum and excellent solos, making it one of the more thrilling versions of this tune in the MJQ discography.

At the end of their October 1956 session and at a follow-up session in Baden-Baden two weeks later, the MJQ were joined by large ensembles led by Harald Banter and Kurt Edelhagen, respectively. The Banter group plays Lewis’ “Midsömmer” in the arrangement recorded for the “Modern Jazz Society” album of 1955. Heath and Kay played on that recording, but Lewis only conducted and Jackson was not present at all. Lewis eventually wrote a setting for the MJQ alone, but on this collaboration, Jackson and Lewis have little to do, except for a few isolated melodic statements and short improvisations. Edelhagen’s big band plays backing charts on “Bluesology” and “Django” but the arrangements are clearly not by Lewis (they sound a little like Quincy Jones or Gigi Gryce’s writing of the period) and the band’s interjections just get in the way of the MJQ. The new album’s only live tracks come from a concert in Pforzheim in November 1957. The more interesting of these two live performances is “Sun Dance”, a piece Lewis wrote after seeing Hopi Indian dances in his native New Mexico. It was originally recorded on the Modern Jazz Society album, and by the MJQ on the first Music Inn LP. At Pforzheim, Kay introduces a new sound to the piece. He moves his backbeat pattern from the crisp hi-hat to a jangly tambourine (or perhaps his beloved bell tree). The delayed reaction of this new percussion adds to the loping feel of the performance, and with this delightful new rhythm, it seems odd that this piece was never recorded again by the MJQ.

The final session was a television recording made in Baden-Baden in October 1958, and it is considerably more casual than the earlier dates. There is a relaxed two-beat version of “You Go To My Head” that was probably devised on the spot, and an “I Can’t Get Started” which opens with a rubato Lewis solo before developing into a dual improvisation between piano and vibes. Producer Joachim-Ernst Berendt received an encore of the piece named for him “J.B. Blues” which had premiered at the Donaueschingen concert the year before, and he suggested that Jackson record a version of “Tenderly” as an unaccompanied solo. Recorded years before Gary Burton did the same feat at a concert in Montreux, Jackson’s solo was apparently a one-time favor, and to the best of my knowledge, he never tried it again.

The Modern Jazz Quartet continued to make outstanding recordings for another 16 years. They disbanded in 1974, but they decided to regroup a few years later and they continued performing together through the early 1990s. When illness took Kay out of the group, Mickey Roker stepped in as an able replacement, but there were no more MJQ recordings after Kay’s death in 1994. Within 11 years, the rest of the band had passed away. Unfortunately, the band’s concept seems to have died too. No other group has duplicated the MJQ’s unique mixture of composition and improvisation. The MJQ was sui generis, and the “Lost Tapes” CD offers further evidence of their unique artistry.