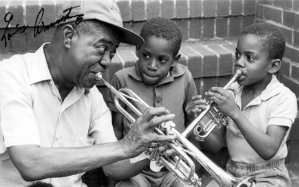 Last week, I interviewed for a job at a major health care organization. The interviewer was in his late 20s or early 30s and was seemingly well-educated. He asked me about my inspirations, and I told him that no one inspired me more than Louis Armstrong. He responded with a blank stare and said he didn’t know who Armstrong was. I mentioned his most popular traits (trumpeter, Satchmo, gravelly voice, Hello Dolly, What a Wonderful World) but nothing registered. Had I been hired, I would have burned him a CD sampler of Louis’ best recordings; since I’m still unemployed, I only hope that he will take my advice and look for Armstrong recordings on iTunes.

Unfortunately, this was not an isolated incident; I’ve met several people of the same generation (and younger) who are completely unaware of musical giants like Armstrong, Ellington, Basie, Parker,  Gillespie and Coltrane. As further evidence, catch “Jeopardy!” some night when they ask about jazz, classical music or opera, and see how otherwise impressive contestants fumble when trying to identify famous musical artists.

Clearly, we have failed these people. Their musical knowledge barely extends beyond pop, rock and hip-hop. We can’t blame the record companies or the media for this cultural gap. Many classic jazz recordings are now available on CDs or through online music services (Amazon lists over 14,000 Armstrong tracks for download!). Many jazz films have appeared on YouTube, and these clips can bring deceased artists like Armstrong back to life through their music. Internet jazz radio offers options for general listening as well as in-depth historical programs like Indiana Public Radio’s “Night Lights” and the artist marathons on Columbia University’s jazz station WKCR. Jazz at Lincoln Center‘s introductory jazz history course will be available as a streaming video this fall.  And of course, Jazz History Online and similar websites are dedicated to promoting the jazz legacy. There’s no shortage of information out there; we just need to spark the interests of potential listeners.

Public school music programs were once the best source for new listeners. I first learned about jazz in junior high school, when our band director used an hour of rehearsal time to play us recordings of Maynard Ferguson’s big band. That hour changed my life completely. I started to collect jazz records, read all I could about the music, and moved from clarinet to alto saxophone so I could play in stage band. In some schools, those opportunities still exist through the integration of music history into band and choir rehearsals. In addition, several well-funded high schools offer substantial music programs with music appreciation and basic music theory. But these are the exceptions.  Many states (including my home state of Colorado) do not require arts classes for high school graduation, and student preparations for mandatory academic tests have cut into time for music and the arts. In many schools, the class periods for arts classes are as short as 45 minutes, which hardly allows enough time for rehearsal, let alone historical context.

If we can’t count on the schools, we must count on ourselves. Jazz musicians and jazz enthusiasts are the best spokespersons for this music. It is essential for jazz’s survival that we actively support the music in its past and present forms. If the genius of Armstrong or Ellington is not obvious to a novice listener, they may need to hear jazz in a different context first. So take someone to a concert, or better yet, to a university- or commercially-sponsored jazz festival. And if you’re not in a place where jazz musicians play, go where the music is. Plan a mutual vacation to a larger city and include a jazz performance in your itinerary. Don’t forget that most jazz musicians are happy to encourage new fans, so try to meet the players after the show. We may not be able to make everyone a jazz fan, but we must share our enthusiasm so that the music will continue long after we are gone. It’s never too early to start, and in the case of my interviewer, never too late, either.