Kurt Elling’s visits to Denver’s Soiled Dove are fast becoming a holiday tradition. Last year, he performed a two-night stand at the club, featuring a highly diverse program of Christmas music, protest songs, contemporary choral music (courtesy of guest artists, The Swingles), improvised funk and progressive jazz. This year, he could only stay for one night, so he offered two distinct sets, the first of Holiday music (culled from his album, “The Beautiful Day”) and the second of politically-related songs (from “The Questions” and the new digital EP, “The Questions—LIVE”). While Elling threw in Jaco Pastorius‘ “Three Views of a Secret” amidst the holiday fare, he did not repeat any selections during the evening. A few hearty souls stayed for both sets (despite the separate admission charges) and they were treated to a remarkable program that displayed Elling’s incredible range, depth and flexibility. 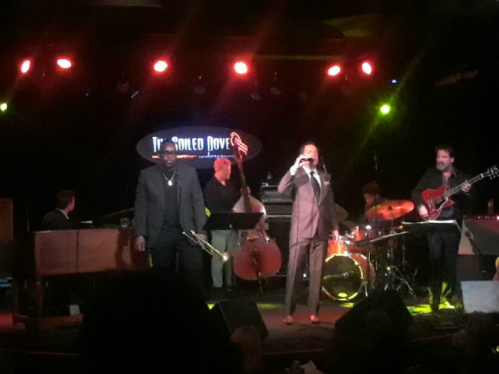 keyboardist, Stu Mindeman). But the set truly started to take shape with the lovely “Some Children See Him” from the Burt Carols. Elling incorporated a set of new lyrics which referred to God in the feminine, and guitarist John McLean’s arrangement concluded with a powerful group crescendo which seemed to lift the entire room. Then all of the band members left the stage, save bassist Clark Sommers, and he and Elling performed a delightful duet based on a Dave Brubeck/Paul Desmond blues line, known alternatively as “Balcony Rock” and “Audrey”. For the words, Elling offered a fable about God, a group of clouds, and a thimble. Drummer Christian Euman and guest trumpeter Marquis Hill then returned for a funky version of “The Little Drummer Boy” that incorporated hipster lingo, a New Orleans street beat and free-bop improvisations. Elling took lots of chances in his high-flying solo, while Hill’s solo explored the same pitches using alternate fingerings. After a stunning version of the Jaco Pastorius piece, Elling performed an off-hand rendition of Mel Tormé’s “The Christmas Song”, and Hill brought to mind the neglected Chicago trumpeter Clarence Gene Shaw during “This Christmas”. Hill astounded throughout the night: using just a trumpet (no flugelhorn) an occasionally used harmon mute and no visible mouthpiece changes, he evoked the sounds of great modern jazz trumpeters like Clifford Brown, Lee Morgan, Freddie Hubbard and—most surprisingly—Clark Terry.

The audience for the second set was hipper than the first, and very sympathetic to Elling’s funny (and clearly liberal) comments. He ruminated on some of the questions inferred by his recent album: “How in the world did this happen?”; “How long will it last?”; and “How deep will the hole be?”. It should be said that the names of the current White House occupants were never mentioned. It should also be said that this music holds up especially well, despite the political content; indeed, most of the tunes were composed for different times and different situations. Elling opened the set with a stunning a cappella rendition of the main lines from Bob Dylan’s “A Hard Rain’s A-Gonna Fall”, and when the band entered, the vocalist went into an impassioned scat solo which instantly pushed the ensemble to greater heights than on the first set. The audience recognized the irony of poet Franz Wright’s “A Happy Thought”, which began Assuming this is the last day of my life, which might mean that it is almost the first, and later they appreciated some of the world-wise comments from the singer regarding love, passion and simplicity. “Lonely Town” featured a Brownie-like solo from Hill and an exciting trumpet/scat dual improvisation over the closing vamp, while Carla Bley’s exquisite “Lawns” found Hill emulating classic Mil 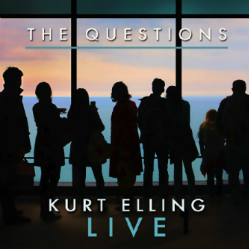 es Davis in his solo, and McLean leading another group crescendo at the end. Ben Webster’s classic “Mellotone” contrafact “Did You Call Her Today” swung deeply with Mindeman, Sommers and Euman driving the group from the bottom up. Elling’s lyrics were interesting in that they dealt with the communications between a traveling musician and his wife back at home; Webster, who never married, certainly titled the original tune in reference to his beloved mother. The set closed with a joyous version of “Upward Spiral” (from Elling’s collaboration with Branford Marsalis) featuring outstanding solos by the entire ensemble. Elling topped it off with a stunning vocal display holding a series of ridiculously high notes for an unbelievable length of time. Finally, to satisfy an audience who wanted an encore, Elling came back to the stage alone, and sang an unaccompanied version of “I Remember Clifford” retooled to salute its lyricist, Jon Hendricks.

Those who are unable to catch the remainder of this tour can hear some of this music on the new digital download “The Questions—LIVE”, a 49-minute recording made in London in October 2018. The arrangements were essentially the same as the ones played in Denver, and some of Elling’s introductions appear in slightly different versions. The live versions make stunning comparisons with the studio recordings made approximately 18 months earlier, and for my money, the live versions are superior. Naturally, it’s hard to recommend one album without the other, but the lower cost of the download makes it a good introduction to this challenging music. Should anyone require further proof of Kurt Elling’s status as today’s greatest male jazz vocalist, these recordings—and his emotionally overwhelming live performances—present a mountain of evidence.