Jazz and the Philharmonic (Okeh CD/DVD) 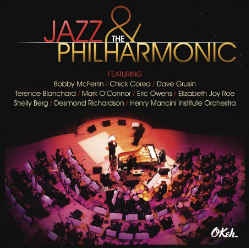 In the last 100 years, virtually every style of music has been influenced by jazz. Classical composers have long been the frontrunners in this area, starting with Milhaud’s “La Création du Monde”, Stravinsky’s “Ragtime” and the piano concertos of Aaron Copland and Maurice Ravel. But the influence of jazz goes much deeper in the classical music of our time. Contemporary composers bring a wide range of stylistic influences to their music, To play these new works, orchestral musicians must negotiate complex rhythms, dense harmonies and extended instrument ranges, and choral singers must have an understanding of jazz harmony and be able to sing tightly-voiced harmonies without vibrato. Naturally, aspiring musicians need to have a wider range of instruction than in years past, and it is heartening to see programs like Young Arts, the Henry Mancini Institute and the University of Miami’s Frost School of Music, where students are encouraged to explore a wide range of musical styles. The brightest and best of those three programs (including mentors and alumni) came together for a January 2013 concert now released as the CD, DVD and PBS special, ”Jazz and the Philharmonic”.

While the concert order has been shuffled for the video, all of the performances feature guest artists playing either in small combinations or as featured soloists with the Mancini Institute’s orchestra. The latter pieces are a mixed bag: The compositions from the Bach family—father Johann Sebastian’s “Fugue in C minor” and son Carl Philip Emanuel’s “Solfeggietto”—are both presented in new arrangements, but the string writing is much too heavy for these Baroque and Classical works. On the other hand, the jazz variations (especially the big band styled shout choruses in the fugue) are expertly written and performed. Chick Corea’s “Spanish Suite” offers a further development of the relationship between Rodrigo’s “Concierto de Aranjuez” and Corea’s jazz classic, “Spain”, and the present version offers superb showcases for bass-baritone Eric Owens (singing in both Spanish and English), Terence Blanchard and Corea (In addition to being the artistic director of the Mancini Institute, Blanchard was also a member of the very first Young Arts class). Shelly Berg’s original composition “Incandescent, Iridescent, Effervescent” features the composer and Elizabeth Joy Roe on pianos along with the orchestra in a fascinating work of contrasting moods. Owens and Roe are also alumni of the Young Arts program and while both are primarily classical performers, they are able to perform these jazz-influenced works with great conviction. The Mancini Institute orchestra is a revelation: the ensemble, comprised of undergraduate-aged musicians and conducted by Scott Flavin, plays these works with a combination of inspiration, precision and energy which rivals many professional orchestras.

The guest soloist spots are also quite good. The opening “Autumn Leaves” features Bobby McFerrin, Corea, Dave Grusin, and the rhythm section of the Mancini orchestra. It’s refreshing to hear Grusin play straight-ahead jazz, and McFerrin contributes a harmonically astute scat solo. McFerrin also returns to his roots as he performs two unaccompanied solo improvisations, one with audience participation and the other with dancer Desmond Richardson. The duet with Corea and McFerrin on “Armando’s Rhumba” exhibits the joys of pure improvisation, and a piano duet between Roe and Berg on Earl Wild’s arrangement of “The Man I Love” displays their contrasting, but compatible styles. The best of the duets is a brilliant series of variations on “Simple Gifts” by Grusin and Mark O’Connor. O’Connor’s violin style is clearly rooted in the country fiddle tradition, but his performance—which sounds at least partially improvised—is a superb amalgamation of jazz, pop, classical and country styles. Set right in the middle of the video, it is the perfect summation of the musical fusion that these musicians and organizations strive for.

The recording was supervised by the late Phil Ramone (to whom the disc and concert were dedicated). The DVD’s Dolby Digital sound is exceptional, and the video production uses split-screens to effectively catch simultaneous actions. The accompanying CD contains 9 of the 13 selections from the concert with a slightly different running order. Unfortunately, the package does not include “Becoming An Artist”, a 30-minute documentary about the Young Arts program which will follow the PBS broadcast on February 28. Since the entire purpose of this set is to heighten awareness of this important organization, it is too bad that this film was not added as a DVD bonus. However, those interested in learning more about Young Arts (which also encompasses dramatic and visual arts) can explore their website and watch the series of Young Arts master classes on HBO. Programs like Young Arts, the Henry Mancini Institute and the Frost School of Music are essential elements in the continuation of the arts in America. They deserve your attention, gratitude and support.