The Jazz of Physics (by Stephon Alexander) 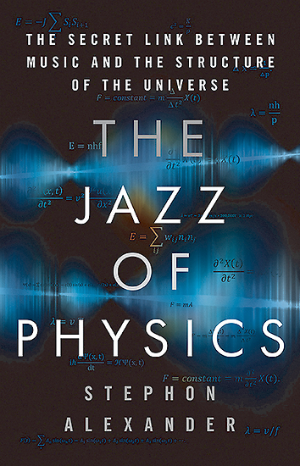 One of the most beloved episodes of the TV series “WKRP in Cincinnati” was “Venus and the Man”, where the station’s sole black DJ, Venus Flytrap, taught the basics of the atom to a tough black teen. Realizing that the young gang leader was not responding to the Latin names of the atom’s parts, Venus changed the name nucleus into “the neighborhood”, and created gangs called the “Proboys” and the “Elected Ones” (later revealed as protons and neutrons). Within two minutes, he communicated a simplified but memorable demonstration of the atom’s elemental functions. Of course, it wasn’t just the gang leader who learned the lesson: everyone watching the show learned, too. The episode was acclaimed by educators nationwide, as it showed the benefits of using analogies to describe complex scientific concepts. The same idea is the basis of Stephon Alexander’s new book “The Jazz of Physics” (Basic Books). Alexander discovers surprising links between improvised music and the laws of the natural world. Going back to Pythagoras’ discovery of the overtone series and his belief in the “music of the spheres”, Alexander shows that the connection between science and music has a long and fascinating history. He also uses his own experience as a physicist to show how he and his colleagues improvise to discover solutions to long-standing problems.

In addition to his scientific career, Alexander is a working jazz musician. He started on piano as a child and switched to alto saxophone a few years later. Remarkably, as a youth he had an ear for the complex late-period music of John Coltrane, and he soon realized that what was called “free jazz” had plenty of rules and required extraordinary musical skills. In one of his book’s more stunning pronouncements, Alexander states that in the “Jupiter” movement from “Interstellar Space”, one can hear Coltrane literally channeling the orbits of Jupiter’s moons in his improvisations. If that thesis sounds far-fetched, note the response that Coltrane’s son Ravi offered to Alexander when asked about Trane’s possible connection to Einstein’s theory of relativity: My father was deeply into mathematics and physics. Whether the music stands up to this interpretation is a subjective matter, but at the very least, Alexander’s claim could inspire listeners to listen to that challenging Coltrane LP again. Alexander also writes of his passions for hip-hop, baroque and contemporary classical music, and the works of Brian Eno. Even for those readers who get lost in the book’s maze of scientific equations, Alexander inspires us to re-examine music that may have puzzled us in previous encounters.

Getting lost in the physics is highly likely, too. I am not an expert in math and science. Like many others, I took a physics class in college because it was a requirement. I picked up enough knowledge to successfully navigate the clues presented on “Jeopardy” and follow the discussions presented in “Cosmos” (in both the Carl Sagan and Neil DeGrasse Tyson editions). Yet, I found myself increasingly lost in the dense text that populates the center of Alexander’s book. At least three consecutive chapters have no analogies to jazz whatsoever, and only a few comparisons to other types of music. While Alexander understands that his prospective readers may not understand all of the concepts, it is hard to follow his suggestion to keep reading with the hope that the concepts will eventually make sense. At times, Alexander’s suggestion works, but when the reader is confronted with a series of complex ideas related in an academic writing style, it is very tempting to give up completely.

Those readers who give up will miss out on some of Alexander’s best work. In the later chapters, he compares the note choices made by Sonny Rollins to the theory of quantum motion. He notes that the “blues scale” offers plenty of acceptable notes, but that a master improviser like Rollins knows how to make the individual notes flow together like a well-written sentence. And yet the direction of the improvised line can change spontaneously, with the variance of a single note choice. Contemporary jazz saxophonist Mark Turner amplifies the thought with this remarkable quote: When I am in the middle of a solo, whenever I am most certain of the next note I have to play, the more possibilities open up for the notes that follow.  Alexander compares the spontaneous directions of an improvised solo to a particle in classical Newtonian physics [which] starts at some initial time and moves through space ending up at rest at a later time, tracing out a deterministic, continuous one-dimensional trajectory.

Alexander offers a running commentary on his personal challenges of being a physicist. He tells of his graduate school experiences of writing endless equations in search of a grand discovery. There is no end to this quest, and thus, it seems right to predict that “The Jazz of Physics” is far from the final word on this subject. Alexander has made a gallant effort to connect two seemingly distant worlds, but I wonder why he did not associate the symmetry of Einstein’s theories to the symmetry in classic jazz solos by Louis Armstrong, Frank Newton and Lester Young. And if he could not find appropriate jazz—or at least, musical—analogies to the dense theories in the center of his book, was he unable to relate them without resorting to the typical dry textbook writing style? While I appreciate the connections he has made between jazz and physics, I doubt that I will remember those abstract theories as well as I recall Venus Flytrap’s simple description of the atom.