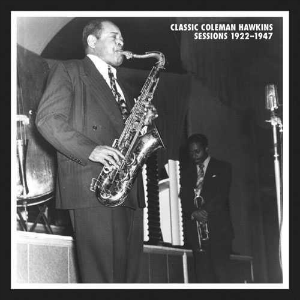 Throughout most of his half-century career, Coleman Hawkins listened, learned, and evolved. Never satisfied with being just another tenor saxophonist, Hawkins strove to be the best jazz soloist in the world. He single-handedly developed the language for jazz tenor saxophone, and while that would have been enough to put his name in every jazz history book, Hawkins was not content to be just an historical figure. He was a frequent visitor to after-hours spots, where he listened to—and challenged—his greatest contemporaries. Over the years, he adapted his style to play an impressive group of genres, and work with several generations of musicians. The opening track of Mosaic’s 8-CD collection, “Classic Coleman Hawkins Sessions, 1922-1947” finds the 18-year old saxophonist as a sideman with blues singer Mamie Smith. He uses the “slap-tongue” style that had been popularized by saxophonists on the vaudeville circuits of the day. Not long after that recording, Hawkins joined the Fletcher Henderson Orchestra and started developing a new and richer sound, as well as a fresh improvisational model built on arpeggiated (and later substitute) chords. As the years progressed, Hawkins became a commanding presence in the Henderson sax section, audibly leading the section on several recordings, and becoming a master soloist, creating improvisations that were copied and studied by legions of young musicians. In 1934, Hawkins left Henderson and toured Europe for five years, usually working as a featured guest soloist with established bands. When he returned to the US in 1939, there were other tenor saxophonists with followings that rivaled Hawkins’, but through his commanding presence and the strength of his playing, Hawkins quickly rose back to the top. By 1947 (the end of the Mosaic set) Hawkins had transformed himself yet again, leading a band of young beboppers.

The Mosaic set includes many of the recordings that made Hawkins famous, including the 1925 Henderson side, “The Stampede” which contained one of Hawkins’ best early solos in his arpeggiated style, the propulsive 1929 “Wherever There’s a Will Baby” with McKinney’s Cotton Pickers, the contrasting solos in “Hello Lola” and “One Hour” from a Mound City Blue Blowers session (also from 1929), the exciting (and under-recorded) 1930 Henderson band performing “Chinatown, My Chinatown”, two versions each of the big band classic “King Porter Stomp” and Hawkins’ futuristic composition, “Queer Notions”, the prototypical tenor sax ballad, “It’s the Talk of the Town”, the remarkable series of band sides co-led by Hawkins and trumpeter Henry “Red” Allen,  the incomparable post-war ballad triumphs on “Body and Soul” and “How Deep is the Ocean?”, and the jaw-dropping long-meter 1943 improvisation on “The Man I Love”. Also included are several rarities, including a fine 1931 reunion of Hawkins and Mound City, a 1932 Henderson Victor recording of “Strangers” with a Hawkins solo that defies rhythmic transcription, a 1934 duet session with pianist Buck Washington which furthers Hawkins’ reputation as a master soloist, big band and small group collaborations with Benny Carter, and nearly all of the surviving music from the 1946 Metronome All-Star date with Frank Sinatra, Nat King Cole, June Christy, Charlie Shavers, Lawrence Brown, Johnny Hodges, Harry Carney and Buddy Rich.

What makes the collection truly extraordinary is the amazing sound quality. Mosaic’s restoration engineer, Andreas Meyer has worked wonders with this wide array of vintage recordings. Applying 24-bit technology to source material ranging from original 78s to CDs (and including lo-fi tape dubs of rare alternate takes), Meyer achieves a remarkably consistent sound through most of the set. Some background noise inevitably remains, but it never interferes with the music. Additionally, the sound retains its natural contours; there are no harsh cymbal crashes with half of their overtones missing.

Mosaic makes no claims that its collection is “complete”. It draws from the vaults of Sony Music, which includes labels owned by Columbia and RCA. Mosaic also adds sides made for labels currently in the public domain, such as Continental, Baronet, Manor, Ca-Song, and Regis. However, listeners will not find Hawkins milestones like the Vocalion Henderson recordings, the 1944 Apollo sessions with Dizzy Gillespie and Don Byas, or anything from Hawkins’ stay in Europe. Further, Mosaic was highly selective when picking music from the Sony vaults. A producer’s note in the booklet states that inclusion in the set was based on either Hawkins appearing as leader, or soloing for more than 16 bars. While the criterion was relaxed in some cases, it was apparently not loose enough to allow in any of the recordings where Hawkins and Louis Armstrong played together in the Henderson band, or important recordings like “Hop Off”, where Hawkins’ solo entrance disrupts the 2/4 swing of the band with a ripping triplet pattern. Of course, many of the jazz record collectors liable to buy this collection have these famous recordings elsewhere in their collections, but I doubt that they would find them reproduced in the stunning fidelity that marks the Mosaic set.

The liner notes were written by Loren Schoenberg. Schoenberg has spent many years as a swing-oriented tenor saxophonist, so his expertise both as a musician and a jazz historian play into his lengthy essay. He knows Henderson’s music well enough that he can point the listener to spots where the lead instrument changes, and his experience in big bands informs his opinions about soloists who create “set solos” played verbatim each time an arrangement was called. Much like his predecessor Stanley Dance, Schoenberg makes his musical preferences readily apparent to his readers. However, unlike Dance, Schoenberg recognizes the excellence of later musicians, and makes a noble effort to link the various styles of the music. Schoenberg also realizes that music does not exist in a vacuum, and he frequently cites the works of Hawkins’ fellow tenor men, Lester Young, Herschel Evans, Chu Berry, and Ben Webster. I can only disagree with Schoenberg on a couple of points. First, he claims that a sudden change in Hawkins’ tone (which happened right before he left for Europe) is the result of a different microphone placement. The fact that Hawkins recorded for several companies (and with several recording engineers) makes it more likely that Hawkins changed something within his instrument—perhaps his mouthpiece and set-up—or adapted his playing technique to create a richer sound; otherwise, the sound would have changed again whenever he recorded in a different environment (Meyers’ consistent sound in the remastering seems to bear this out). Second, Schoenberg states that every musician applying to a university should memorize and play Hawkins’ solos on “Body and Soul” and “The Man I Love” as audition pieces. I agree with that statement in principle, but I believe that students would learn much more by transcribing these solos (either individually or as part of a college course in jazz theory) and analyzing Hawkins’ unique approach to the harmony. Schoenberg lays out some of this argument within his discussion of “The Man I Love”, but he fails to make the connection that transcription and theory are still a vital part of jazz education. The main problem is that most students transcribe the solos of later musicians and forget the groundbreaking work of Hawkins.

This Mosaic set could well solve such problems. It offers a splendid overview of the first half of Hawkins’ career, and the many musical riches show the wide range of his artistry. While the 189 tracks of the Mosaic set might be rather daunting for a newcomer, a sample of the tracks—perhaps the ones listed above—would be a good way to approach this music. While there is not a satisfactory collection of Hawkins’ European recordings presently available, the out-of-print collections on the French Classics label can still be found, and the Avid double CD “Dutch Treat” collects all of Hawkins’ recordings from Holland with fine remastering. The music of Coleman Hawkins is one of the bedrocks of jazz history, and “Classic Coleman Hawkins Sessions” gives considerable justice to that outstanding legacy.